Lewis Hamilton has admitted to being inspired by Marcus Rashford’s efforts in trying to fight child hunger in the UK. Rashford campaigned for the government to allow 1.3 million children to claim free school meal vouchers in England last summer and has continued to do his best in raising awareness on child hunger.

His efforts off the field saw him being awarded an MBE in the Queen’s Birthday Honours list.

And Rashford has now been named in Time magazine’s Next 100 list for his campaigning efforts on child poverty.

The list other sports stars, politicians and musicians among others as people who are shaping the future of the world.

Each entrant had someone else write a small column on why that person was worthy of a spot on the prestigious list.

JUST IN: F1 news: Lewis Hamilton and George Russell at risk of suspension 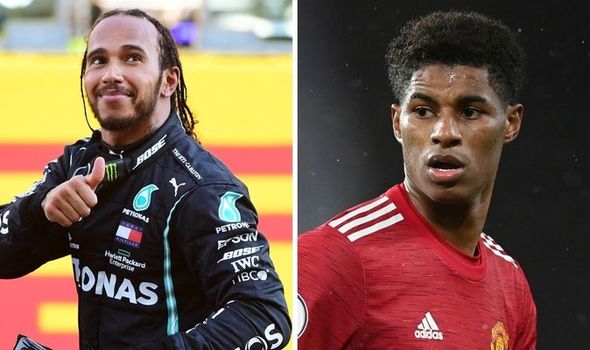 And seven-time F1 world champion Hamilton was chosen to write a small piece on Rashford’s influence.

Hamilton himself has taken up a powerful role to try and battle for racial equality in Formula One as well as making a stand against social justice.

The 36-year-old launched a research project last year titled ‘The Hamilton Commission’ to try and improve diversity in motorsport.

But Hamilton also took insipiration from Rashford’s active role off the football pitch in the England international’s battle to fight child poverty.

“In 2020, Marcus Rashford took his many talents beyond the football field – where he is a star player for Manchester United and England’s national team – to respond to a national crisis: child hunger,” Hamilton wrote for Time.

“‘I know what it feels like to be hungry,’ he wrote last June as part of a campaign that succeeded in pushing the government to provide meals for students in need during summer vacation.

“By standing up for the most vulnerable in our society, and using his platform and influence to create positive change, Marcus inspired countless others to join him on this mission and cemented his status as a role model.

“In a year that showed us the power of working together toward a common goal, he was a galvanising force behind uniting people across the U.K. in the effort to ensure that no child goes hungry.

“His determination, resilience and persistence have been truly inspiring. I cannot wait to see how he continues this important work.”

Rashford was taken aback by the message from Hamilton in Time, taking to social media to give his response.