Lewis Hamilton has apologised to Mercedes after a massive crash in qualifying at the Austrian Grand Prix. The Mercedes star admitted he was “disappointed” after the incident in the closing stages of the session and claimed the team could have challenged at the top.

Hamilton warned the pace was a “huge positive” after the Silver Arrows looked more competitive compared to Red Bull and Ferrari.

He said: “Yeah, I am OK. It was a big hit but I am OK. I am incredibly disappointed in myself ultimately and so sorry to the team who worked so hard to put this car together and I never like to bring it back damaged. We were fighting for top three I think and I don’t have an answer for it.

“I lost the back end into turn seven and that was that. I am encouraged for sure, I am encouraged of course to see our performance. We weren’t expecting for it to be as close as that today. That is a huge positive from the team but I am really quite far back so I don’t know what is possible from there but we have a sprint race as well so hopefully I can make up for some lost time.” 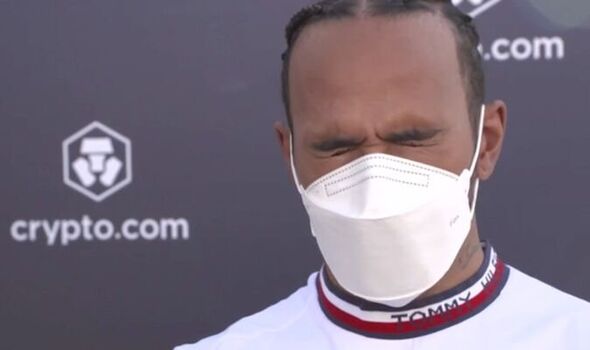 Hamilton lost control of his Mercedes at turn seven on his first proper flying run. He appeared to be caught out by a gust of wind and had a massive snap of oversteer mid-corner.

This threw his car onto the gravel trap before carrying on to smash against the tyre barrier .The impact destroyed the droit end of the car and the red flags were thrown while the debris was cleared.

Hamilton also apologised to his team over the radio moments after the collision. He said: “Damn, I am so sorry guys. I’m so sorry to damage the car.” Where did we end up? What position am I?”

His race engineer, Marcus Dudley, responded: “We are still waiting for the rest of the session. We are currently P8 and we are going to end up in P10.” Dudley then claimed Hamilton had the pace to go second if he had completed the lap.

Team-mate George Russell also crashed out in Q3 in what was a horror session for the German manufacturer. But, team principal Toto Wolff defended both drivers after the session despite the double blow.

He added: “These two should never beat themselves up because of this situation – crashing out. We’ve given them a car that wasn’t on par for 10 races in a row and now we’re starting to come to terms and drive in front, it can happen that you just lose the car.

“I’d rather have a fast car and a Qualifying like this than not having the pace to be in the top four.”