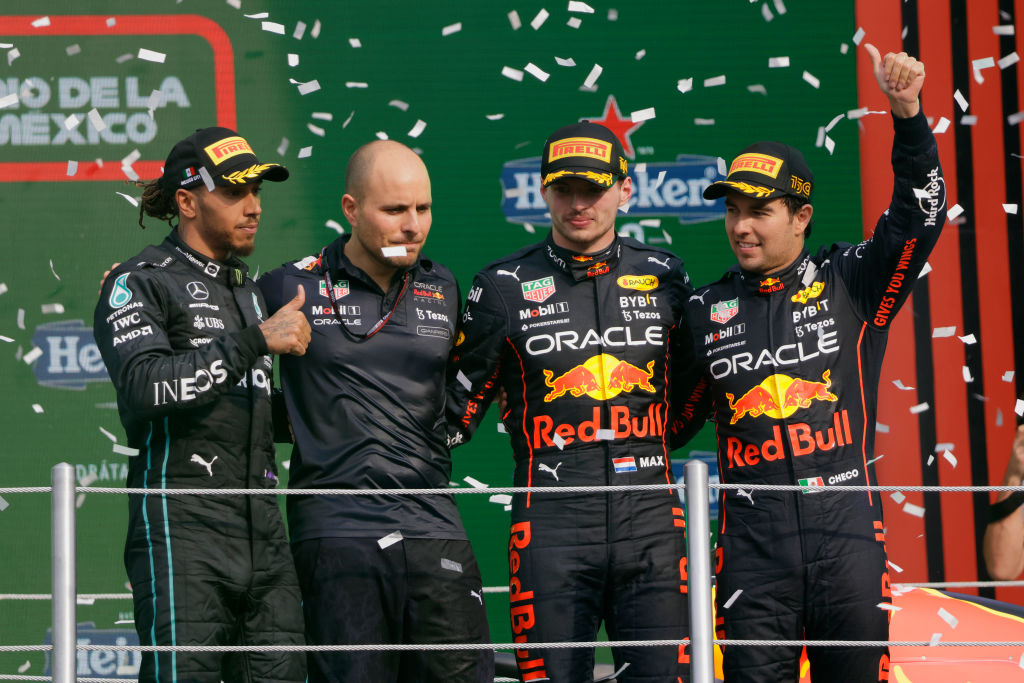 Lewis Hamilton has described being ‘booed all day’ at the Mexican Grand Prix as ‘awkward’ after he finished ahead of Sergio Perez.

Max Verstappen claimed a record-breaking win on Sunday but Hamilton finished second to deny Red Bull a one-two with Mexican driver Perez – in front of his home crowd at the Mexico City GP – forced to settle for third on the podium.

The Red Bulls and the Mercedes ran different strategies, with the Silver Arrows running the hard tyres under the belief that their opponents would lose time at the end of the race or even pit again as their medium tyres wore out.

But it was not to be for Hamilton and fellow Mercedes driver George Russell – who finished fourth – with Verstappen and Perez able to manage their tyres to the end and the Dutchman cruising to the chequered flag with a 15 second gap.

That saw Verstappen register his 14th victory of the year, the most in a single season in the history of Formula One.

Michael Schumacher and Sebastian Vettel had previously won 13 in a single campaign, in 2004 and 2013 respectively.

But one of the main storylines of the day was the Mexican crowd booing and jeering Hamilton and the Great British hero was quizzed about it after the race.

“Ultimately, we should have been on the soft”

Lewis Hamilton reacts to his P2 in Mexico ð pic.twitter.com/nNwKRX301i

‘It has definitely been a bit awkward this time around with boos all day,’ Hamilton said.

‘But, nevertheless I have so much love for Mexico and for the people here.

‘I was so close [to Verstappen] in that first stint but I think the Red Bull was clearly too fast and ultimately they had the better tyre strategy.

‘I’m not sure the hard tyre was the right tyre at the end.

‘I thought we should have started the race on the soft [rather than the medium], but obviously we had the opposite tyre to them.’

Perez pleaded with his fans to stop booing by wagging his finger during Hamilton’s post-race interview.