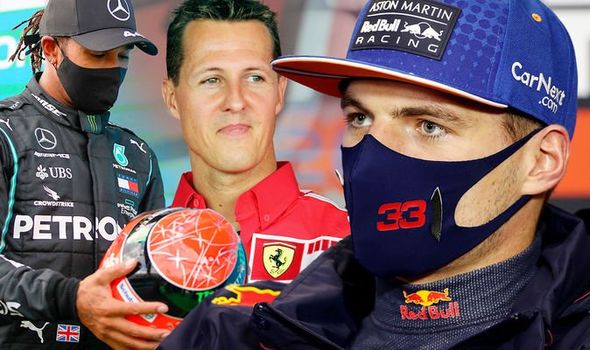 Lewis Hamilton won the Portuguese Grand Prix to break Michael Schumacher’s record of 91 victories in the sport. The current F1 world champion beat his Mercedes team-mate Valtteri Bottas to take the win and make history in the sport.

After the race Red Bull star Max Verstappen revealed he had spoken with Hamilton about the record.

The Dutchman joked he would need to race until he is 40 to have any chance of beating the 92 wins Hamilton now has.

The win in Portugal means Hamilton is now 77 points clear of Bottas and closing in on his seventh world championship.

“We were just talking about it,” laughed Verstappen.

“Lewis said he keeps pushing because he wants to set it [the bar] very high. I have to work very hard to try and get there.

“I mean, it’s amazing. It’s just an incredible achievement. 92 victories and I don’t think it stops there.

Verstappen thinks the consistency Hamilton shows is the most impressive thing about the F1 world champion.

He added: “I think, to Lewis, it’s incredible. He’s also going for his seven world titles, which is very impressive.

“Everyone knows he is very quick, but I think what has been also a real strong point is that he is very consistent, very rarely makes a mistake and that’s why I think he got to these numbers so quick. Yeah, it’s just very impressive.”

After breaking the record of Schumacher, Hamilton couldn’t hide his delight and marking his name in F1 history.

He said: “I could only ever have dreamed of being where I am today.

“I didn’t have a magic ball when I chose to come to this team and partner with these great people, but here I am. 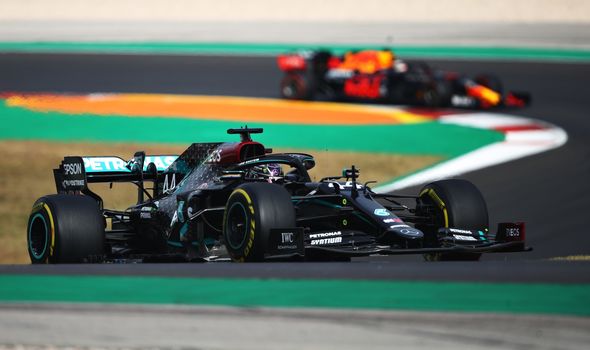 “Everything we do together – we are all rowing in the same direction and that’s why we’re doing what we’re doing.

“And my dad’s here and my step mum Linda, and Roscoe [Hamilton’s dog]. It is going to take some time for it to fully sink in.

“I was still pushing flat out as I came across the line. I can’t find the words at the moment.”

F1 returns this weekend with the San Marino Grand Prix as Hamilton closes in on his seventh world championship.