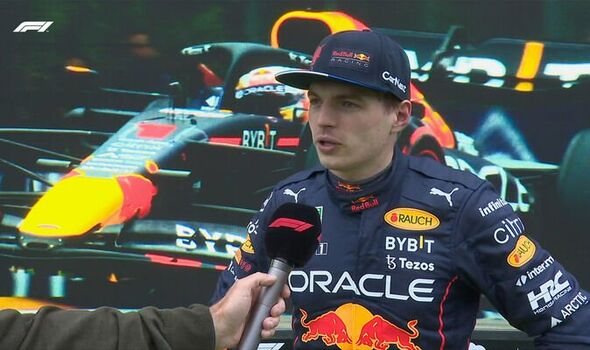 Max Verstappen said his Imola pole was tricky” after a “hectic” qualifying session which involved five red flags. The Dutchman managed to set the fastest lap moments before a red flag to pip Charles Leclerc on Ferrari’s home turf.

He said: “It was tricky out there, dry, rain, very slippery. It was hectic, a long qualifying but at the end I’m very happy to be here. It’s a great track, I know tomorrow and Sunday will be different in terms of weather conditions but a great start to the weekend.

“Our first races didn’t go to plan.” It is the reigning champion’s first pole position of the 2022 season but Red Bull’s second after Sergio Perez was fastest in Saudi Arabia.

Verstappen was on provisional pole position with minutes to spare before a red flag after Valtteri Bottas stopped in the last sector. The Dutchman lifted off the accelerator when he saw the yellow flags but was still able to go seven-tenths faster than Leclerc moments before the red flag was brought out.

He outlined this to his race engineer seconds later, adding: “I did a massive lift when the yellow flags came out.” Team principal Christian Horner confirmed the team were satisfied with his ease when he spoke to Sky Sports F1 moments later.

The session was restarted with a few minutes remaining but a Lando Norris spun at Acqua Minerali which brought out another red flag. With less than a minute left on the clock, the FIA confirmed the session would not restart meaning Verstappen remained fastest.

He said: “He did a super job, It was an unusual qualifying and the one lap that turned out to have counted was the one lap that we banked. It looks maybe at the end there the circuit might go quick again bur there was too much rain for anytime to respond and then another red flag.”