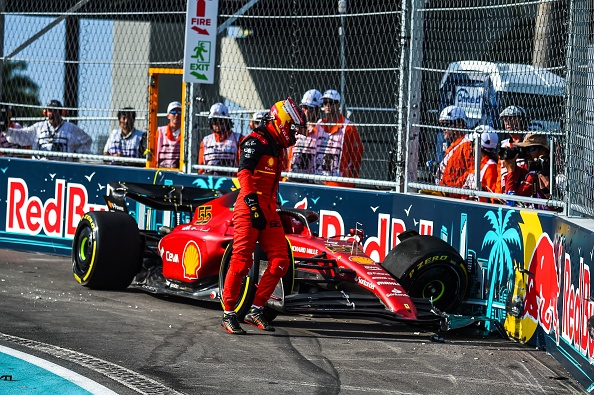 Carlos Sainz Jr. and Esteban Ocon have slammed the FIA for ignoring their safety concerns regarding the Miami Grand Prix circuit.

Formula 1 has travelled to the Miami International Autodrome for the first time this weekend, with the race slated to get underway at 8:30pm on Sunday.

While drivers have praised most of the high-speed street circuit, there have been concerns regarding the tight, narrow section of the track at the end of the second sector.

Sainz spun his Ferrari into the barriers at Turn 14 during Friday practice, and even though it was a slow-speed crash, the lack of run-off area combined with the hard concrete barriers left the Spaniard in a lot of pain.

He took his concerns to the sport’s governing body soon after but claims that they didn’t want to know.

‘I’m sorry to be critical, but I told the FIA yesterday that my crash at second gear shouldn’t feel that hard,’ Sainz told Sky Sports after qualifying on Saturday.

‘But today, my neck was a bit in pain, and I told them: “Let’s put Techpro [barriers] there because it’s a very hard concrete wall”.

‘Esteban crashed and I’m pretty sure he felt it too. It’s one of those things I will never understand. I did bring it up already, [but] no change.’

During Saturday practice, Ocon had a near identical crash at the same corner which left his Alpine with a cracked chassis, and as a result the Frenchman missed qualifying.

‘Carlos said the impact was way too big, and today it felt huge. It’s probably the biggest shunt of my career to be fair,’ Ocon said.

‘I hurt my knees. That’s the biggest thing. I was not expecting it to be that bad. Would there have been Techpro, probably the chassis would have been fine.

‘We’ve discussed it with Carlos yesterday, with the race directors, to say that we should probably put a Tecpro barrier there and it hasn’t been listened to.

‘So yesterday Carlos got hurt, today I got hurt as well. That is not acceptable, and the FIA should push harder for our safety.

‘When a professional driver of the calibre of Carlos, driving for Ferrari, says something like this yesterday I think the minimum is that it should be taken into consideration and do the best possible to make a change.’

Several other drivers have expressed their support for Sainz and Ocon, including Valtteri Bottas, Sergio Perez, Pierre Gasly and Lance Stroll, with the Aston Martin man labelling the FIA’s inactivity on the matter as ‘ridiculous’ and ‘a joke.’

But a spokesman for the FIA said officials had inspected the area of impact and decided no changes were necessary from a safety perspective.