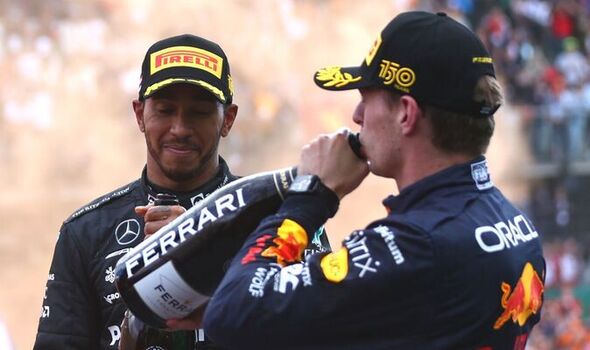 Dr Helmut Marko is adamant Lewis Hamilton will be Max Verstappen’s greatest challenger next season as he raised doubts  – despite an impressive campaign with Ferrari. It’s been a breeze for Red Bull this term following a series of problems with Mercedes’ W13 that has left Toto Wolff with plenty to wrap his head around after a monumental collapse from the Silver Arrows following eight successive years of dominance.

But there has already been signs in recent weeks that Mercedes are now on the right track after Lewis Hamilton finished second in Mexico behind Verstappen.

While the seven-time world champion is still yet to win a race this season, there is now confidence within Mercedes that they are finally starting to improve their car following a whole host of disruptive issues earlier in campaign that effectively wrecked their hopes of snatching back the world championship.

Verstappen has cruised to his second successive title having won 14 races this season, while team-mate Sergio Perez is his closest rival having secured 10 podium finishes.

Marko, though, is under no illusions that Hamilton will come roaring back next season as he looks to reclaim his throne as the Austrian raised doubts over Leclerc’s title credentials.

“Leclerc was very strong in qualifying,” the German broadcaster told NTV. “But he was prone to making mistakes.

“I see (Lewis) Hamilton as a stronger challenger for 2023. He has a clear advantage in terms of experience, he can motivate himself incredibly well and I’m also convinced that Mercedes will put a better car on the track next year.”

The Red Bull chief was also full of praise for Verstappen though and warned rivals the 25-year-old is only getting better and better as he looks to establish himself as an all-time F1 great.

“He drives more confidently than ever with more overview of the race overall. At the same time he has developed into a tyre whisperer,” Marko added on Verstappen.

“He drives on a soft tyre for longer than his competitors on a harder compound. I haven’t seen his limit yet.

“All he needs is a very good grip at the front – what the rear is doing doesn’t affect him that much. That only makes the other drivers nervous.

“You saw in the early stages this season that Max was as fast as (Sergio) Perez in a car that didn’t suit his driving style. Once the car fit, he was half a second faster.”

Meanwhile, Mercedes chief Wolff has made it clear he expects his team will have to play catch up with Red Bull after encountering a series of problems earlier in the campaign as he sent a defiant message to his rivals.

“That will certainly be an advantage for them. They will take the positive aspects of that car into the next cars,” Wolff told RacingNews365.

“We may have lost eight to ten months in that development battle because we couldn’t figure out what was wrong. So there’s definitely a challenge ahead of us. But we’re playing the long-winded game. Everyone here.

“We don’t judge the team by one year or one weekend, but by how we have been able to win multiple world titles in the long run.”