Anyone who saw the pictures of Mick Schumacher’s wrecked car, torn into pieces after the Haas driver smashed into the wall at Monaco on Sunday, must wonder how on earth the German managed to walk away unscathed.

It looked horrendous but amazingly he managed to step out of his car and dust himself down. Schumacher was one of the first on to slicks and was probably building up his confidence a bit early.

If this had been the late 1980s or early 1990s, the consequences could have been extremely serious. And even in the early 2000s, it would have been more the luck of the draw. I would not have been surprised to see broken bones.

Since Ayrton Senna’s death at Imola in 1994, the safety regulations have changed dramatically. The cars are heavier, so if they go into a barrier, there is more energy to absorb. A technical working group was set up, which I was part of for many years. Then, the idea was the chassis should be a “survival cell” which is surrounded by crash structures. Everything around the survival cell is used to try to absorb the energy of an accident.

Big accidents will always look horrendous, but as long as the survival cell is intact and nothing impregnates it, the driver will be safe.

One thing people learnt after the Senna tragedy was that the G-force a body can take can be a lot higher than medical experts thought. It is a question of duration. 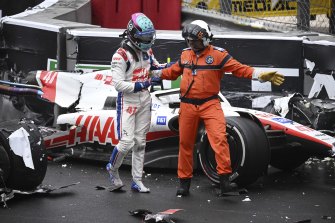 Since then, the FIA has said it would be better if the gearbox broke off the engine rather than the engine breaking away from the chassis.

The theory is that the more bits that come off the car, the more energy is absorbed. In Schumacher’s case, the energy required to take the gearbox off slowed the car down. This also meant he was sitting in a lighter car when he had his secondary impact. The Tecpro barriers are also crucial in increased safety. Anything that gives you distance and absorbs the energy of the car hitting it is essential.

We have seen quite a few fairly big accidents lately and Schumacher has had two of them this year. He is playing a major role in the FIA’s safety research.

Gary Anderson is former technical director of Jordan and Jaguar