Red Bull themed party bus, Bayern Munich, RB Leipzig and Hollywood royalty in attendance and a fashion catwalk at the iconic Hangar-7… Sportsmail went behind the scenes at the glitzy AlphaTauri 2020 car reveal

When we rocked up to Salzburg’s iconic Hangar-7 in a Red Bull themed double-decker party bus with DJ music blurring out from the speakers, we knew we were in for one special night at the unveiling of Scuderia AlphaTauri’s inception.

As we entered the spectacular building – which hosts the historical Flying Bulls aircraft fleet and a collection of Formula One race cars – the red carpet had been rolled out awaiting the arrivals of some of the biggest names in both sport and Hollywood.

But before we were allowed to take in our stunning surroundings at Hangar-7, the media were ushered straight upstairs to conduct interviews – with those in charge of the operational side running a tight schedule ahead of what would turn out to be a spectacular occasion. 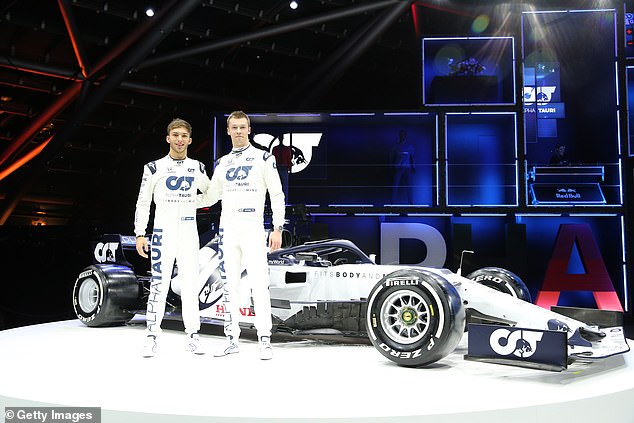 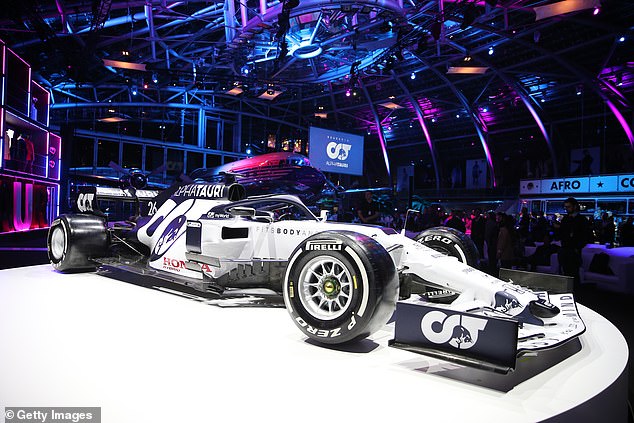 The car in all its glory: Last Friday marked a fresh new era for the Red Bull development team 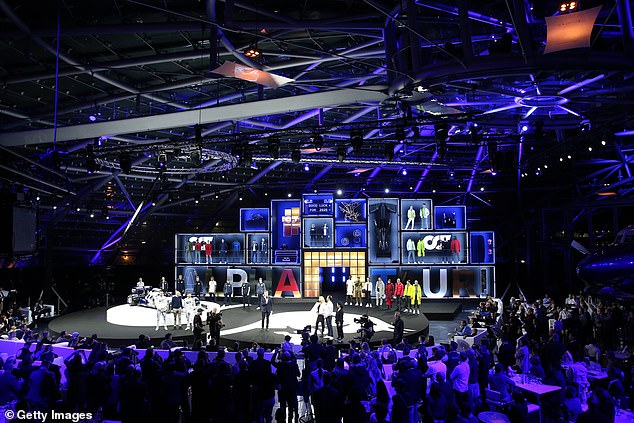 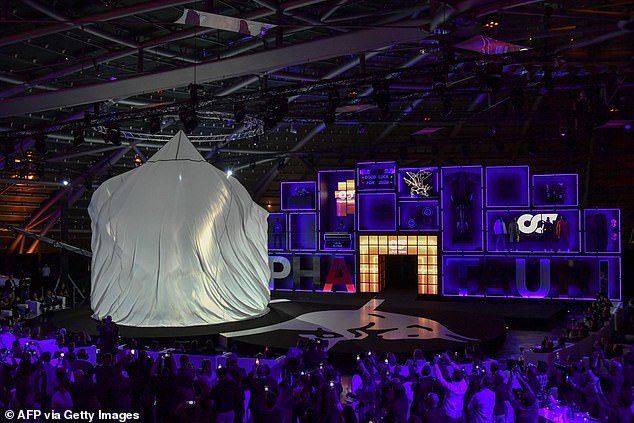 ‘I must say, you can see tonight with all the lights and everything it is a fantastic event and for me – this is the most beautiful presentation I have seen in Formula One,’ were the words hailed to Sportsmail by an extremely proud AlphaTauri team principal Franz Tost.

This was some statement from Tost – who is the second longest-serving team boss in the pit lane, behind only Red Bull counterpart Christian Horner.

Last season, Tost led then Toro Rosso to their most successful ever campaign with drivers Pierre Gasly and Daniil Kvyat both placing on the podiums at the Brazilian and German Grand Prix respectively.

And now an exciting new dawn was beginning for AlphaTauri, who were unveiling their F1 car ahead of the 2020 season following their re-branding in reference of promoting the AlphaTauri fashion label.

Since their inception in 2006 they have always been known as the junior team to Red Bull but that might be about to change, something that was echoed by David Coulthard, who hosted the star-studded event in Salzburg.

‘It does feel like a special event for AlphaTauri to be moving forward, and for myself personally,’ Coulthard told Sportsmail. ‘When I joined Red Bull racing in 2005, my first meetings were here. 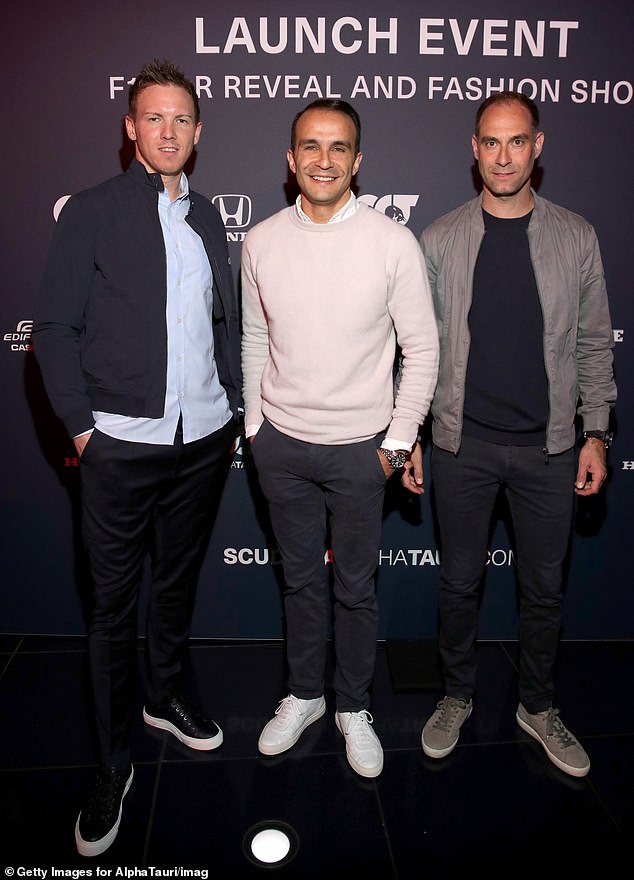 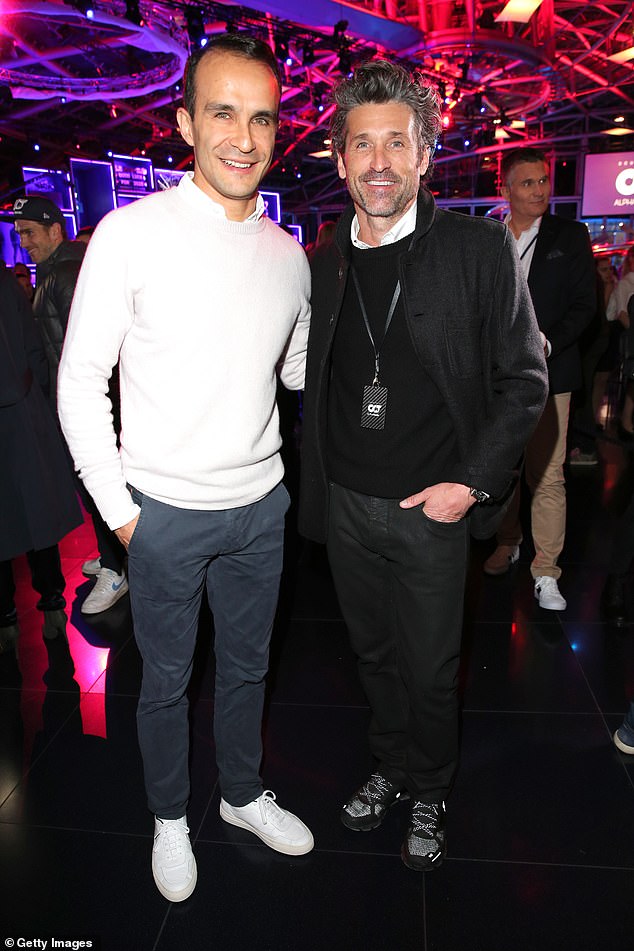 ‘At the time, it was quite interesting because I was racing but I saw Toro Rosso as a potential distraction when it was formed in 2006.

‘Of course we were trying to build up Red Bull Racing but they have shown great vision and it’s served a great purpose in terms of the development side of young drivers.

‘The meaning of Toro Rosso itself is a wordplay on Red Bull but they actually have a brand to sell now. I think the partnership with AlphaTauri, the fashion brand, will put more focus on the team as well and the expectation will maybe passed on from the shadows of Red Bull Racing.’

But while the racing side of things remained at the heart of everything, Friday also marked an historical occasion not only for AlphaTauri but for the sport itself, as the unique unveiling mixed fashion with F1.

And with plenty of surprises in store, some big A-list celebrities took the opportunity to see what AlphaTauri had to deliver – with the likes of RB Leipzig manager Julian Nagelsmann, Germany legend Lothar Matthaus and former Bayern Munich boss Niko Kovac all in attendance.

Meanwhile, F1 chief executive Chase Carey and Hollywood actor Patrick Dempsey also arrived in style to the glitzy ceremony in Salzburg, alongside 500 other fortunate guests and media representatives from around the globe. 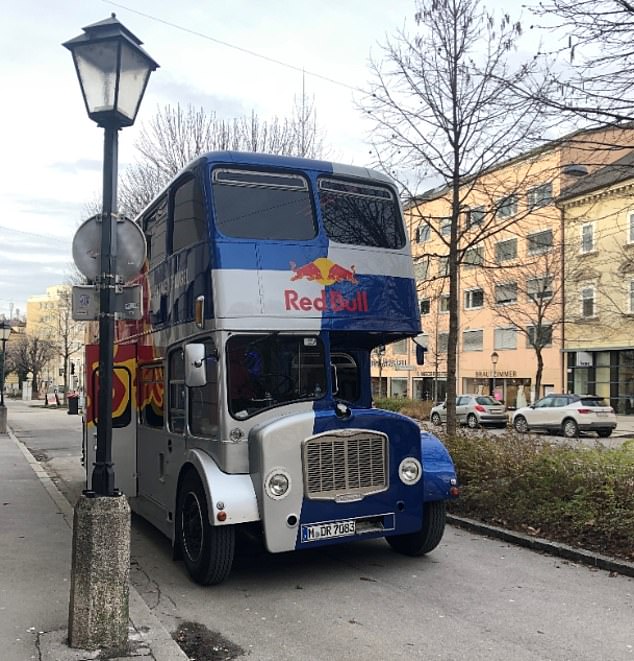 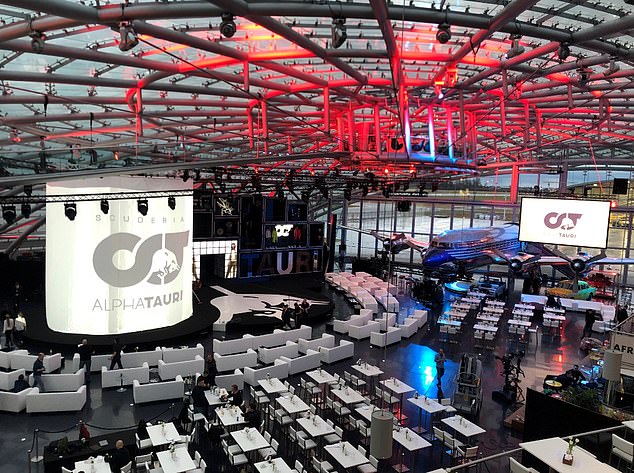 The calm before the storm: The set up on arrival ahead of the grand unveiling at Hangar-7

After the stars mingled with each other on entrance before the support acts showed off their talents – which included a DJ, a breakdancer and an artist using his mouth to paint both drivers – Nagelsmann and Co then took to their prime seats ahead of the main show.

And what happened next wasn’t any ordinary unveiling. There was a long prelude to the main spectacle as Red Bull’s premium fashion brand revealed their new range, with both male and female models strutting their stuff on the catwalk behind a huge AlphaTauri backdrop while the 2020 car remained hidden on stage.

Plenty of teasing followed as those in attendance caught a projection of the car on giant circular curtains hiding the new livery, before the lights dimmed and the DJ’s beat dropped – the grand unveiling was finally coming.

Then all of a sudden, as the guests simultaneously got their mobiles and cameras out to capture the special moment, the curtains lifted and there it was – the new AT01 car for 2020 in all its glory, which was met by a huge round of applause from all inside.

Meanwhile, some 600km away in Milan, a replica of the car was simultaneously unveiled on the facade of the prestigious Rinascente fashion store as hundreds gathered outside to witness the unique moment. 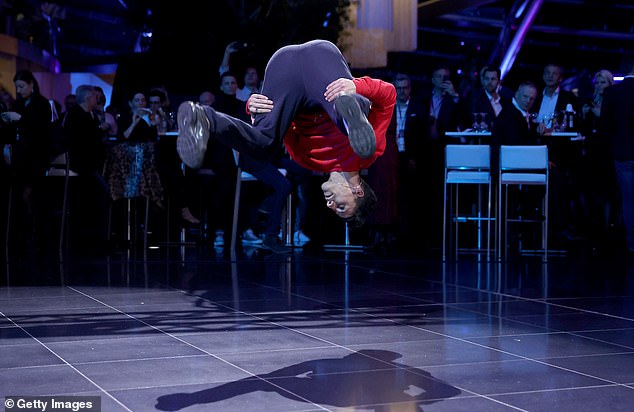 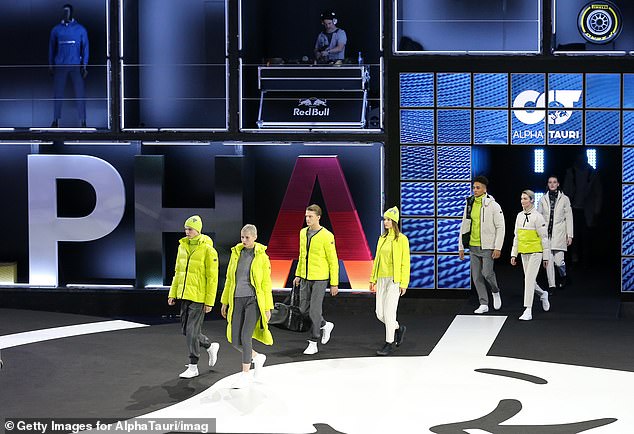 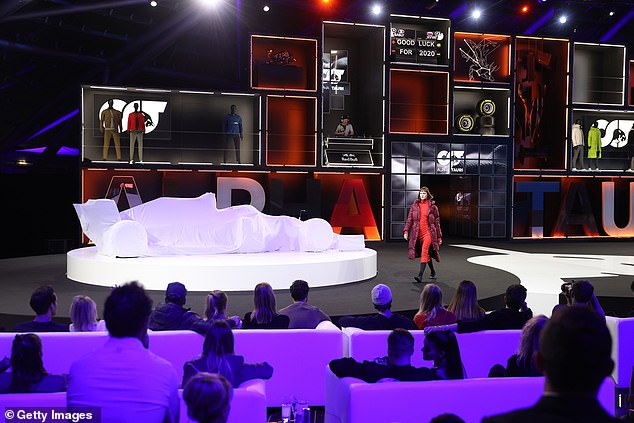 Coulthard – who hosted the ceremony in Austria – then walked out alongside Gasly and Kvyat in their new innovative AlphaTauri overalls, clearly upbeat about their future.

As Coulthard addressed the crowd, the guests bundled to the front to get prime view and capture a first glimpse of the car and the drivers in their classy new race suits.

It felt like a momentous occasion and both Gasly, who finished seventh last season, and Kyvat, who placed 13th, were quick to talk up this new stage in their careers.

‘It’s a new chapter starting with AlphaTauri and for sure Toro Rosso really meant something special because they gave me my first opportunity in F1 and I had my first podium with them last year in Brazil,’ Gasly said.

‘And now we are starting from a new page, we are super excited with this new project, challenge and to mix fashion with Formula One. I love fashion. Of course F1 is what I love most in my life but I think it is an exciting project and extremely exciting to be part of it. 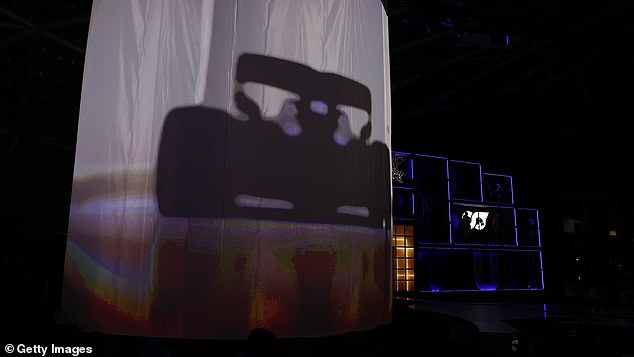 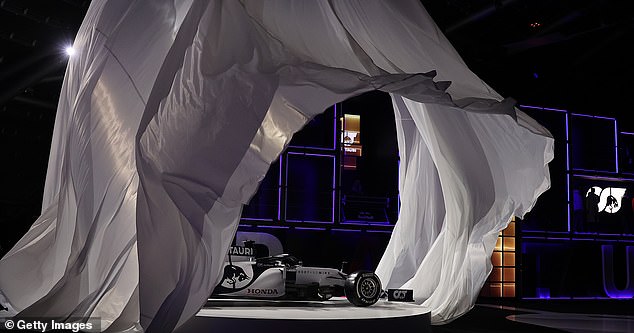 After a long wait, the AT01 car is finally revealed as the curtain is lifted off on stage 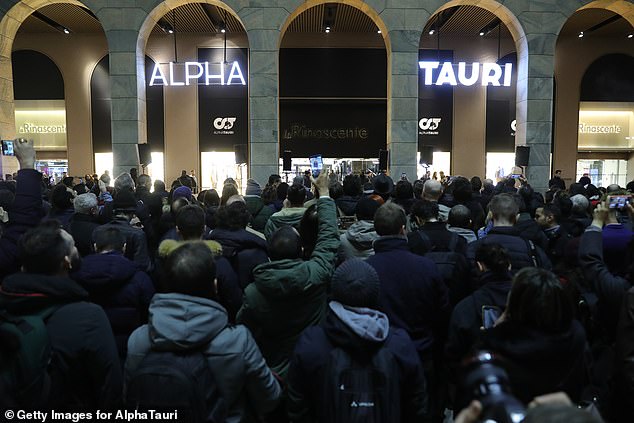 ‘When you start a new project, you always want to make it big. That is the will of everybody inside AlphaTauri.

‘I want to win races, I want to score big points and I want to have a fantastic season. Maybe we are good enough to be fighting for fifth in the team championship, perhaps fourth.’

Kvyat was no different, revealing his hope that this significant change would take Red Bull’s junior team to heights they’ve never reached before.

Kvyat added: ‘Hopefully it will be the start of something special. Last year was the strongest season in the team’s history but now it’s a new chapter, a new name and fingers crossed we will be able to take it to another level for the first time.’

AlphaTauri have big aspirations and if there unveiling is anything to go by, then they might just be a force on the up. 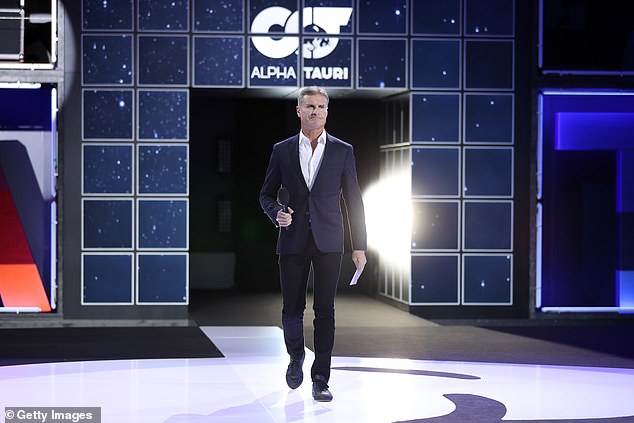 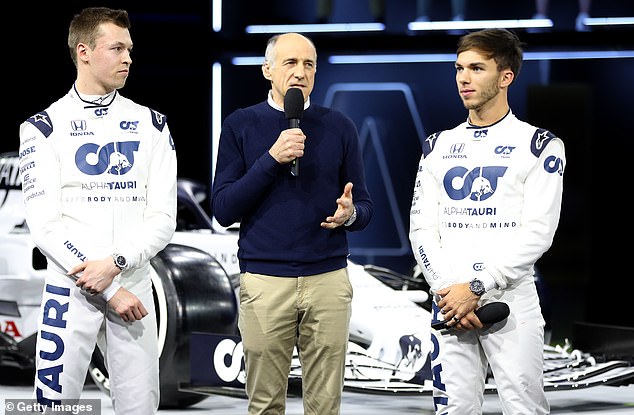 Franz Tost, along with Kvyat and Gasly, will be hoping for an even better season than last

The big question on everyone’s lips is whether they can now emerge from Red Bull’s shadow and become their own entity.

They have all the ingredients to succeed and with young and exciting drivers in the pit lane, the future is certainly bright.

Gasly and Kvyat have been getting a first feel of the AT01 car during testing in Barcelona this week but the real business starts at the Melbourne Grand Prix on March 15 as the new season gets underway.

It will be a landmark occasion in Australia and eyes will be gazing firmly on AlphaTauri to see exactly what they can produce.

Tags: behind, sce, Sportsmail, THE, went
You may also like
Latest Posts