F1 preview: A lap of the Hungarian Grand Prix

Valtteri Bottas has taken a cheeky swipe at George Russell after bringing up the pair’s epic Imola crash from last year when joining in with a social media craze surrounding the Finn’s Mercedes successor. The F1 duo had previously drawn a line under the unsavoury incident, however that didn’t stop Bottas from thrusting their feud back into the limelight ahead of the French Grand Prix last weekend.

The Briton has found himself at the centre of a tongue-in-cheek social media craze in recent weeks in which fans have shared memes about the Mercedes driver, playfully joking about quintessentially British things the 24-year-might might do. These included slapping his thighs and saying ‘right then’ before leaving a room, and asking the waiter ‘what’s the damage?’ before being handed the bill at a restaurant.

Even the likes of fellow drivers Daniel Ricciardo and Alex Albon joined in with the good-spirited ridiculing when probed on the subject over the weekend. The Aussie said: “George Russell is the kind of guy who selfishly has two first names” while Albon described the Mercedes man as the “kind of guy who takes his top off during a security check in an airport” as he poked fun at Russell for the many topless pictures he has uploaded to social media.

However, Bottas was far more brutal with his comment. Referencing a high-profile clash between the pair at Imola in 2021, even though the pair had appeared to both move on from the incident, the Finn remarked of Russell that he is the type of guy “to overtake in damp conditions at the end of the main straight in Imola.” 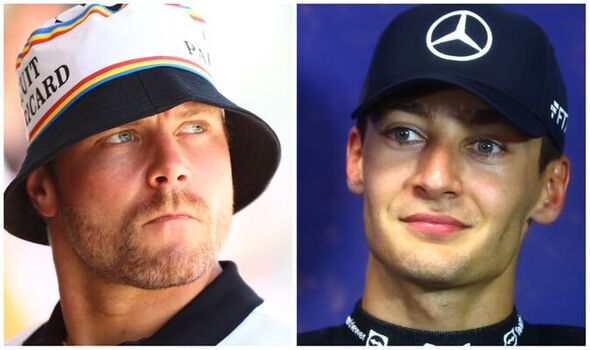 At last year’s Emilia Romagna Grand Prix, Russell, then of Williams, attempted to overtake Bottas’ Mercedes down a long straight, only to clip the grass and spin straight into the Finn, spectacularly taking both drivers out of the race. At the time, Russell immediately confronted his rival on the track, remonstrating as he stood over Bottas before slapping the Mercedes driver on the helmet following X-rated reactions from the pair on their respective team radios.

Russell later implied Bottas had deliberately defended his position in an unnecessarily aggressive manner due to fears his position with Mercedes was under threat – claims which Mercedes team principal Toto Wolff dismissed as “b*******”. The Brit then swiftly took to social media following the events of the race weekend and issued a lengthy apology, in which he admitted Sunday “wasn’t my proudest day” and that “emotions can run high in the heat of the moment and mine got the better of me”. 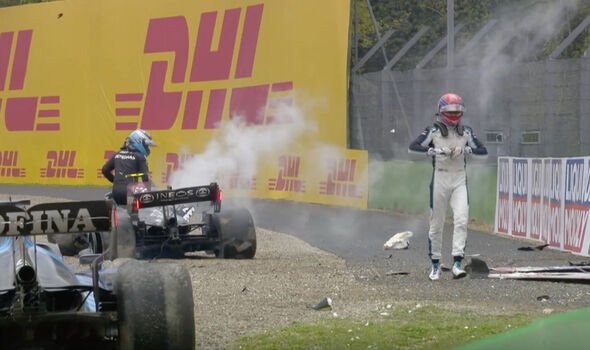 Russell again addressed the incident in March of this year, further condemning himself as a “d***” and an “idiot” for his rash actions and response. He told GQ: “I made myself look a bit of a d****.

“If I look back on how I handled that, I’d probably laugh at myself and say ‘what were you doing?’ I just looked like an idiot, like I’d lost the plot. And to be honest, for a second, I probably did lose the plot.”