Max Verstappen led from start to finish as he won the Austrian Grand Prix for Red Bull on Monday morning (AEST), powering 32 points clear of Mercedes’ Lewis Hamilton in the Formula One championship.

Ferrari’s Carlos Sainz was fifth, with Perez sixth and Australian Daniel Ricciardo racing from 13th on the grid to seventh. 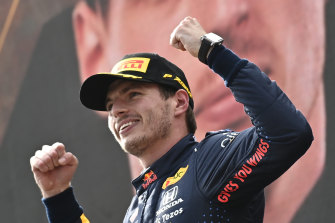 It was the fifth win in a row for Red Bull, who look favourites for a first title since they were last dominant in 2013.

“The car was on rails,” said Verstappen of his fifth win of the season and second from back-to-back races at his team’s home Red Bull Ring.

“Every tyre set we put on it was really enjoyable to drive. I’m a bit amazed how today went, I didn’t expect it to be like this.” 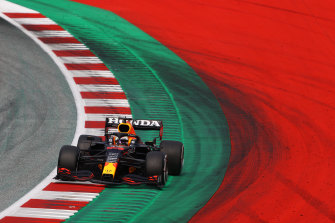 The Dutch fans, present in their thousands, rose to salute their hero as he took the chequered flag in front of the biggest crowd of the season so far after an easing of COVID-19 restrictions.

Verstappen, who started from pole position for the third straight race and has now won on three successive weekends, also set the fastest lap to take his tally to 182 points after nine rounds.

Hamilton has 150 and Red Bull are 44 points clear of Mercedes in the constructors’ standings.

“We’re miles away from them so we’ve got a lot of work to do,” said Hamilton.

Bottas took second after Mercedes initially told him not to race Hamilton, who was ahead, and then gave the go-ahead with 20 laps to go as it became apparent the Briton’s car was damaged and Norris was closing fast.

“Lewis has damage. Do not race him for now,” was the instruction, followed shortly after by “you are free to race Lewis.”

Hamilton had already told his team by then that he doubted he could make the tyres last, and eventually came in for a second stop.

Verstappen also pitted twice, with the team telling him after the last tyre change that they had found a cut on the right rear.

Norris, who had started on the front row for the first time but dropped to fourth after a five-second penalty for pushing Verstappen’s teammate Sergio Perez off the track, passed Hamilton on the track.

The youngster, voted driver of the day for his performance, felt the penalty was unjust.

“He (Perez) tried to go around the outside which is a bit stupid, and he ran off the track himself, I didn’t even push him,” he said.

Russell, starting eighth, had been 10th with five laps to go, as former champions Williams chased their first point in two years.

The safety car was deployed after Alpine’s Esteban Ocon stopped on track with a broken front suspension, having been squeezed between Mick Schumacher’s Haas and Alfa Romeo’s Antonio Giovinazzi on the opening lap.

Norris and Perez then clashed after racing resumed, with the Mexican dropping to 10th.

Perez collected two five-second penalties himself for defending against Leclerc.

The stewards were busy, dishing out further penalties to Japanese rookie Yuki Tsunoda – twice for crossing the white line at the pit lane entry – and Aston Martin’s Lance Stroll for speeding in the pitlane.

There was also a flurry of post-race statements with eight drivers summoned for not respecting double waved yellow warning flags or other offences.

Tags: Austria, in, to, Verstappen, wins
You may also like
Latest Posts