Zhou Guanyu has undergone a final medical check with doctors to determine whether the Alfa Romeo star can race at the Austrian GP this weekend. Guanyu was involved in a horror crash at the British Grand Prix last Sunday, as he spun off the track upside down before crashing into the barriers.

The terrifying incident happened just moments into the race at Silverstone as he clashed with George Russell’s Mercedes car at the opening corner. Following the collision, Russell jumped out of his vehicle and followed marshals and the medical team in racing over to Guanyu who was wedged between the tyre barrier and track-side fencing.

Fortunately the Chinese star was pulled out safely before heading to hospital to go through a number of checks. It was unclear at the time whether the 23-year-old would be able to race in Austria, given the proximity to Silverstone last weekend. 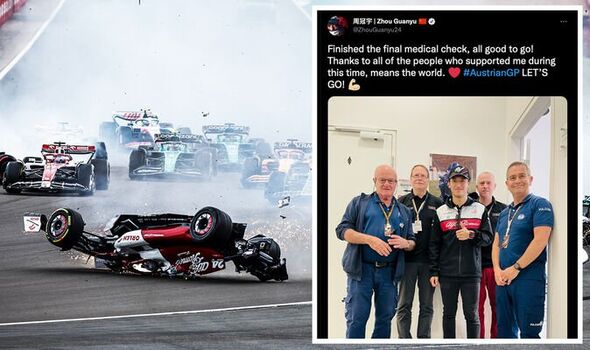 But he has been given the all-clear to race after revealing the good news via a post on Twitter. Along with a picture with his doctors, he wrote: “Finished the final medical check, all good to go! Thanks to all of the people who supported me during this time, means the world. #AustrianGP LET’S GO!”

Following the crash, the design of the halo on the car was heavily praised by many – including Guanyu who believes it ‘saved his life’. After the accident the Chinese star once again took to social media to give an all-important update, writing: “I’m ok, all clear. Halo saved me today. Thanks everyone for your kind messages!”

After revealing to his fans on Twitter that he would be heading to Austria to compete this weekend, many of his followers had plenty of kind words for the Alfa Romeo man. One fan – @EmrysLau – responded: “Was terrifying, I’m so glad and thankful that you’re safe, healthy and have your spirits up.

“Best of luck in Austria, you’ve worked so hard and you really deserve the best results.” Another fan – @amanda_2626 – has high hopes for Guanyu this weekend, responding: “Yay!!! We’re all happy to hear that!! I gotta feeling you’re gonna score points this weekend! Keep working hard!”