Sharni Williams, Australia’s openly gay rugby sevens star, has described the decision of seven Manly players to not wear a pride jersey as a “bit of a punch in the face”.

The 34-year-old, who will run out for Australia on Friday in the Commonwealth Games, has been a proud and vocal ambassador for the LGBTQ community and successfully campaigned to be allowed to wear rainbow headgear at the Tokyo Olympics last year.

After two days of collecting her thoughts, Williams posted a photo of a rainbow accompanied by the caption: “To the seven players at Manly Sea Eagles, this was a rainbow society needed, the game needed and unfortunately through poor communication, lack of awareness and education, we are reminded that some sports are still not a safe space for queer athletes, staff, or fans.”

Williams also quoted Dolly Parton, saying: “If you want the rainbow, you gotta put up with the rain.” 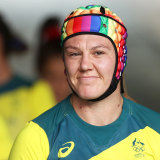 Speaking to the Herald at the rugby side’s training base outside Birmingham ahead of Australia’s first day of matches on Friday against South Africa (6pm AEST) and Scotland (4.20am Saturday AEST), Williams felt it was her responsibility to make a public comment.

“It’s obviously a tough position for me to be in,” Williams said. “I am visible and I have a responsibility, but at the same time I have a job here to be at the Commonwealth Games, to be alongside my teammates.

“It’s a bit of a punch in the face but I also expect it. We’ve been working at it for so long. I respect those haters and I understand it but at the same time I respect my views and I stand there by the people to know there are other people out there for them.

“The rainbow headgear is really important to me. It’s that visibility piece for myself and for my community. It’s finally being comfortable with myself, [which] is huge. Me being able to share my story helps others be able to figure out who they are and what stories they have.

“It’s the communication and education piece. If you communicate early about wearing it, everything can be sorted.

“If one of the girls [in my team] didn’t want to wear it, I’d be like, ‘Well, I understand that’s your view and your opinion but it hurts’.” 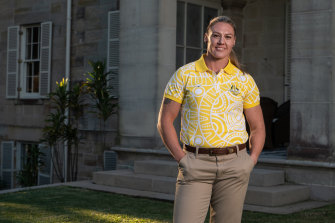 Sharni Williams before departing Australia for the Commonwealth Games.Credit:Flavio Brancaleone

Two years ago, Williams was asked for her views on the Israel Folau saga that dominated the rugby headlines for the best part of 2018 and 2019.

“I don’t know who you are talking about,” Williams said at the time.

In light of the decision by the seven Manly players not to wear the pride jersey, Williams said it was worth providing some context.

“Growing up in a country town feeling isolated, feeling like I didn’t belong, getting told some disgusting things by men, people outing me before I was even comfortable with being who I am … I’ve had a pretty tough upbringing,” she said. “But I’m proud of who I am now.

“I always thought I had to marry a man. I thought I had to walk down the aisle to a man but as soon as I figured out that didn’t have to happen, as soon as the yes vote happened, it was like, ‘Ahhh, there is some relief’. I can now start to be who I want to be.

“We need people to be out there and be our allies and stand up for us. Love is love and that’s the most powerful thing on earth. We’re not on earth very long, so if you’re fighting angst and disappointment and not knowing who you are, you can’t be better for anyone else around you or the world.”

Australia are looking to go one better than at the 2018 Commonwealth Games where the Rio champions suffered a gut-wrenching 17-12 loss to New Zealand in the gold medal match.

“This time I’ll try and stay on the field a bit longer,” said Williams, who injured her ankle in the second match against England. “It all came down to the last play.

“I’ve got a couple of girls in here that I’m double the age of but hey, they’re keeping me young and teaching me how to TikTok.

“No disrespect to Fiji or Scotland … but Fiji is the main game we’re looking at securing. We’re confident we’ve done all the work. It’s time for the footy.”