Football chiefs in Australia appear obsessed with broadcast rights, as if it is their prime responsibility: a record TV deal being a career badge, a sports VC to head a corporate CV.

Rugby Australia chief executive Raelene Castle had a successful time in netball, was the only female boss of an NRL club and survived the public flogging of the Israel Folau saga. Yet she has allowed RA’s next broadcasting rights contract to define her career. 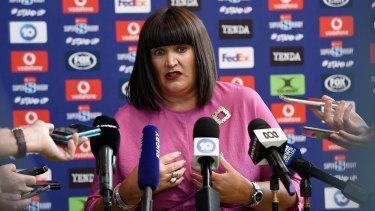 Raelene Castle’s tenure at the helm of Rugby Australia will be defined by the current broadcast negotiations.Credit:AAP

She has taken the RA five-year broadcast rights to tender, spurning an offer from the powerful News Corporation to roll over the current contract, with the hope Channel Ten, Optus Sport and merged telco TPG Vodafone will bid in order to create competitive tension with the 25-year-old incumbent, Fox Sports.

However, if Ten/Optus do win the bid with a record fee, is her job over? Does RA expect Channel Ten – Super Rugby’s first FTA broadcaster – to grow the game for them? RA has already given their four Super Rugby franchises an expectation of more money. So, does a record deal mean executive bonuses are paid and the franchises receive their money, while Channel Ten, with its free and expanded reach, does their job of encouraging more kids to play rugby union?

Peter Beattie, the former chair of the ARL Commission, surrendered the role to fellow board member Peter V’landys because he believed V’landys would secure a better broadcasting deal post-2022.

Beattie reasoned that V’landys, with his long-time connections to Sydney-based media chiefs, is in a better position to negotiate.

True, but perhaps Beattie – a four-term Premier of Queensland, chair of a successful Gold Coast Commonwealth Games but savaged as the ARLC’s tweeter-in-chief – didn’t want an inferior TV deal to end his career.

The TV negotiations are torturous, even for the younger, middle-ranked sports executives holed up in hotels during the final stages, existing on cold pizza and little sleep.

The AFL began negotiations for their next broadcasting deal, also scheduled to begin in 2023, by flying to USA to talk to the online behemoths Apple, Google, Facebook and Amazon.

Presumably, Seven said no. After all, Seven West recently announced a $67m loss for the December half-year.

McLachlan took charge of the AFL in June 2014, meaning he has been close in the role for close to six years. If he finished at the end of the 2022 season, when the current TV contract expires, it would be eight years. 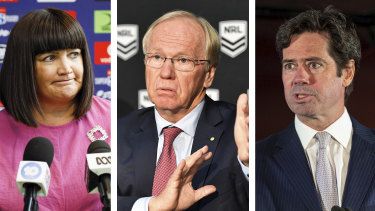 His predecessor, Andrew Demetriou, did 11 years but created considerable tensions towards the end of his sometimes despotic reign. Furthermore, the prevailing mood in the corporate world, particularly following the enquiry into the banking industry, is that the life of a CEO will shorten.

The AFL, in their last TV deal, was given a $200 million free-kick by Rupert Murdoch. Only hours before Murdoch’s private jet touched down at Sydney airport, the ARLC’s then chief executive, Dave Smith, signed the NRL rights over to Channel Nine on a $1.9 billion, five-year contract, forcing Fox Sports to negotiate with Nine for the pay TV rights.

Murdoch was in a vengeful mood. Smith and ARLC chairman John Grant were originally placed next to Murdoch at a table in Catalina’s restaurant, Rose Bay, for a “welcome to Rupert” gathering hosted by News.

Instead, Smith and Grant were placed at the table nearest the toilet, or, as one News Corp executive put it less elegantly, “Rupert sat them near the shithouse.”

But a few days later, when Murdoch signed the record AFL deal, he delivered rugby league a greater slight, announcing “We’ve always preferred Aussie Rules and always believed this is the premium code in Australia.”

Some ARL commissioners, including Grant, have always believed their snub to Rupert gifted the AFL between $150m and $200m.

So, what would be the savvy course of action for McLachlan, given the offers from overseas tech titans to televise AFL – a game played professionally only in Australia – may not materialise, Channel Seven is cost-cutting and Rupert may not be so vengeful next time?

Roll over the current deal, exit and leave his successor to negotiate the next one!

In the interim he could roll up his sleeves and devote his time to what should be the prime responsibility of all chiefs of the Australian football codes: developing the game.

Tags: a, corporate, CV, for, Sports, VC
You may also like
Latest Posts