Aaron vandenBerg has handed over his lovable golden retriever Toby to his mum Christine so someone can walk him and given up golf, just two of the many sacrifices he has made as part of his effort to get his troublesome foot in shape to play AFL.

The tough 27-year-old's return to Casey Fields for the Marsh Series match against Adelaide was his first step towards once again becoming a permanent fixture for the Demons after just seven games in three seasons. 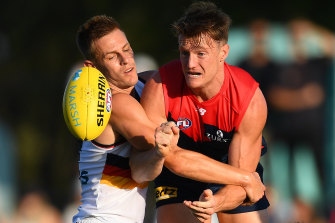 Back in the game: Aaron vandenBerg in action against the Crows at Casey Fields.Credit:Getty Images

Those seven games showed how valuable he is considered, too. He played in the Demons' three 2018 finals after returning to the team following a long absence – due to the same foot injury – in round 20 that season.

"[It] has taken a toll on my lifestyle outside the football club. My main goal is to get back and play and that is the only thing I care about at the moment," vandenBerg said.

Nowadays vandenBerg is only on the training track with teammates once a week and has another session of off-legs training to maintain his fitness.

In his own words he is doing about half as many sessions as his teammates but he is confident enough that his running power will get him through. The main issue is keeping his foot sound.

On Saturday vandenBerg was good, winning the ball 19 times and laying five tackles, a run down tackle on young Crow Ned McHenry in the third quarter a signal to the hard-running high half forward that he had realigned himself with the pace of the game.

"I was half a step off for the first half definitely but it was quite good as we started get the game back on our terms in that second half, which makes it a lot easier to read the ball and read the play," vandenBerg said.

He is happy to admit he wondered whether he would ever return, although he never let that feeling overtake the optimistic one that told him that if he followed the program, he could return and contribute.

He expects to take a break this week before returning for Melbourne's final Marsh Series game against Hawthorn in Launceston in what he hopes will be the start of a season full of football, even with a schedule that looks about as cluttered as that of a suburban cricketer.

"I will train once a week and hopefully play most games," vandenBerg said.

Tags: Aaron, back, f, his, on, vandenBerg
You may also like
Latest Posts