Geelong coach Chris Scott recently joked that champion Cat Gary Ablett would be in the selection mix if he was available on Sunday, as the Cats prepare to honour the greatest player of his generation with a farewell motorcade at GMHBA Stadium.

Although Ablett raised the spectre of a comeback via the mid-season draft, in an interview with News Corp, if he could get the shoulder he injured in last year’s grand final right, sources close to the dual Brownlow medallist said on Saturday that such a return was not likely. 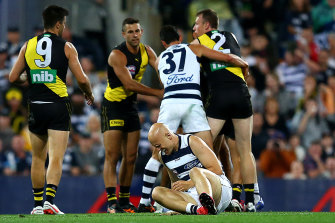 Gary Ablett on the floor injured during the grand final. Credit:Getty Images

The Cats do not have a spare list spot even if the 36-year-old did not have his tongue in his cheek when mentioning the prospect.

Ablett showed enormous courage to play out the 2020 grand final after dislocating his shoulder in the first quarter and performed well in his 357-game career that saw him play in two Geelong premierships. He was given a guard of honour as he left the Gabba which included players and officials from both Geelong and Richmond.

Sunday’s farewell in Geelong will also include dual premiership defender Harry Taylor who has returned to live in Western Australia.

Both Geelong and Hawthorn swung the changes ahead of Sunday’s AFL games with Patrick Dangerfield to make his return from suspension.

With Dangerfield (three-game ban), Brandon Parfitt (hip injury) and Gary Rohan (suspension) returning plus tagger Mark O’Connor out with injury, the Cats were always going to make forced changes for their clash with North Melbourne.

But it appears a message has also been sent with Jordan Clark, Zach Guthrie and Quinton Narkle all out along with medical sub Max Holmes while second-year big man Sam De Konig will make his debut.

North Melbourne has lost three of their big guns to injury in Luke Davies-Uniacke (calf), Luke McDonald (pectoral) and Cam Zurhaar (concussion) with Josh Walker recalled and Atu Bosenavulagi playing his first game as a Kangaroo.

Michael Hibberd and Mitch Brown will play their first games of 2021 for Melbourne who have brought in Harrison Petty as Steven May’s short-term replacement while star forward Bayley Fritsch (fractured hand) is also out as is Neville Jetta (omitted).

Adelaide will be unchanged with only medical sub David Mackay missing out from last week’s side while Fremantle has brought in Rory Lobb, Griffin Logue and Lachie Schultz with Lloyd Meek, Sam Sturt and Tobe Watson all dropping out.

Tags: Ablett, for, in, mid-seas, mix, THE
You may also like
Latest Posts