West Coast have been plunged into further crisis after COVID-19 forced their coach Adam Simpson into isolation and reduced their playing stocks to just 22 available listed players ahead of their trip to the Gabba to face the Brisbane Lions on Saturday night.

It will force the team Richmond thrashed by 109 points last Friday to once again call on top-up players to field a team in round eight, with former Essendon coach and Geelong assistant Matthew Knights to fill in as senior coach.

Eight members of West Coast’s football program – including Simpson, and four players such as Greg Clark, who made his debut last week – have entered the health and safety protocols. They also lost skipper Luke Shuey and small forward Willie Rioli with hamstring injuries.

The Eagles had to postpone their WAFL match and have called on WAFL-listed players to travel to Brisbane. Knights conceded he had never experienced anything like what had occurred in recent days, but they would field 23 fit players against the Lions. The club has been given until Friday afternoon to name their team. 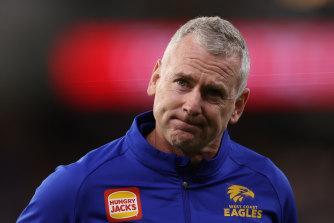 Premiership captain Shannon Hurn and supplemental selection period (SSP) choice Patrick Naish are the only two Eagles to have played every game this season.

Meanwhile, former Magpie and long-time assistant Scott Burns will be Adelaide’s senior coach against Carlton this round after Matthew Nicks was forced into isolation, while the Saints will be without assistant coach Brendon Lade, who coached in Ratten’s absence when St Kilda played the Gold Coast in round four.