Last time they met: Bulldogs make it 4-0 with win over hapless Lions

Adam Treloar soared and his undefeated Western Bulldogs continued to rise with him in a 19-point victory over the Brisbane Lions in Ballarat on Saturday.

The Bulldogs improved their record to 4-0 while adding another question mark over the Lions who fall to 1-3, albeit with one of those losses under a goal.

Treloar was at the top of the Bulldogs’ best with 29 disposals -18 contested – with Jackson Macrae (32 disposals) and Josh Dunkley (27 disposals) right with him. 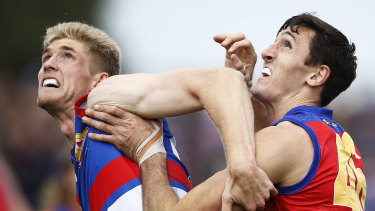 The Lions and Bulldogs head into this clash with their respective formlines a mirror image of each other.

After winning three games in a row and getting their season back on track to pinch a top-four spot from the Dogs, Brisbane let themselves down last week with a humbling 33-point loss to Melbourne in the First Qualifying Final at Adelaide Oval.

Conversely, after losing their last three games of the home-and-away season to give up the double chance to the Lions, the Bulldogs turned things around last week with an emphatic 49-point victory over Essendon in the First Elimination Final in Launceston.

The Bulldogs have the wood over the Lions, too, having won six of their last eight meetings.

But Brisbane rarely lose at the Gabba these days – they’ve won their last nine there by an average of 49 points. Meanwhile, the Bulldogs have lost seven of their last eight at the venue.

Brisbane also lead the finals head-to-head ledger against the Bulldogs 2-1. This will be the sides’ first encounter in a final since their 2009 semi-final meeting, which the Bulldogs won by 51 points at the MCG. 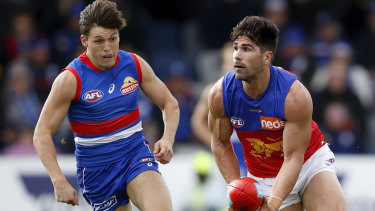 A welcome addition to the commentary options tonight

Brisbane coach Chris Fagan has defended the Lions’ modest recent finals record and pointed to Richmond as an example of growth on a day he kept the Western Bulldogs guessing at selection.

The Lions have won only one of five finals under Fagan heading into Saturday night’s knockout clash at the Gabba. 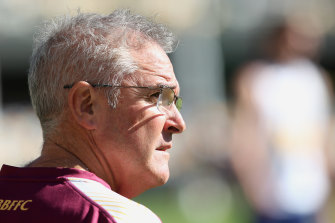 Crunched by Melbourne in last week’s qualifying final in Adelaide, the Lions have worked on their team defence this week, as well as determining how they will handle the absence of hit-up forward Daniel McStay. But regardless of the result, Fagan claimed on Friday that his side, which secured the double chance only in round 23, was still a work in progress.

When season 2020 finished for the Bulldogs and they were released from their Queensland hub, this week’s man-of-the-moment Cody Weightman bought a car and did a solo road trip down the east coast, staying with friends, making calls, listening to podcasts and figuring things out. It took him a month.

He had made a stunning first impression on AFL footy, landing a boundary-line banana goal with his first kick. But he played only two more games that season. He says now those three games and his reflections on them while behind the wheel became the greatest learning experience of his life. 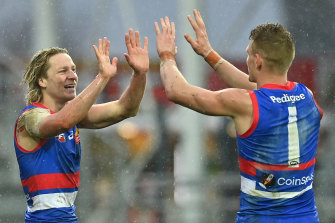 Cody Weightman is congratulated by Adam Treloar after kicking a goal against Essendon in the elimination final.Credit:AFL Photos

Good evening everyone and welcome to tonight’s live AFL blog for the First Semi-Final between the Brisbane Lions and Western Bulldogs from the Gabba.

Both sides are battling for a berth in next week’s Second Preliminary Final against Port Adelaide, which will presumably be held at Adelaide Oval on Saturday night. 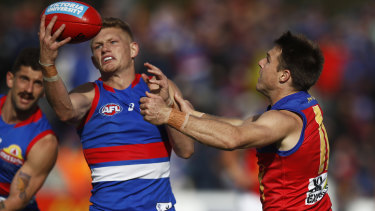 Adam Treloar and Lincoln McCarthy battle for the ball.Credit:Getty Images