The medical subs and a late change for North

North Melbourne has made a late change with Luke McDonald (quad) to miss due to injury with former Richmond player Connor Menadue to make his club debut for the Kangaroos.

The Power have Tom Rockliff as their medical sub with the Roos handing Charlie Lazzaro his AFL debut as the medical sub.

A look back to Saturday footy

We had four great games yesterday. You can relive them on our live blog or check the stories below.

Hawthorn came back from a big deficit to beat Essendon

How Dusty has changed other teams’ thinking

Having transformed himself and then the Richmond Football Club, Dustin Martin has reached that rarefied position of a player who is influencing the thinking and strategy of rival clubs.

The best individuals can open new possibilities, even in team sports. Shane Warne revived the ailing art of leg spin, while Don Bradman was so unstoppable that the ungentlemanly English devised a fast-bowling tactic aimed squarely at curtailing him: Bodyline. 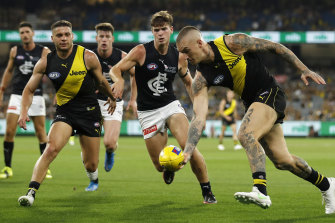 In Australian football, an obvious game-changer was Graham “Polly” Farmer, who revolutionised the use of handball as an offensive weapon.

Peter Hudson’s uncanny talents one-out were such that his coach, Hawthorn godfather John Kennedy, created a tactic of isolating Huddo and cramming everyone else upfield; this eventually led to the creation of the centre diamond, which morphed into the centre square.

So we will have plenty of coverage to come, as always please feel free to leave a comment on the blog at any time.

Enjoy the afternoon to come.