Dangerfield drops cheeky ‘all duck and no dinner’ sledge

Q: Finals footy back here in Melbourne at the MCG.
A: I am not sure whether the last couple of nights have been great for the nerves, they have been wonderful games. Hopefully the margin is a little bit longer this afternoon.

Q: Have you watched them closely on Thursday and Friday?
A: I watched a little bit and as it kept getting close I was getting anxious watching. Maybe it is not the best thing for a game in a couple of nights’ time. A fierce contest. That is what today will be. We have to make sure we make the most of those. The ’G in front of 80,000-plus this is what dreams are made of.

Q: (Geelong coach) Chris Scott during the week said this preparation hasn’t been better for this group. Do you feel that within yourself as the playing group.
A: I feel like we are well- placed. We have really good accessability to our players in the year and the last five, six weeks selection has been tight. Players in and out. That bodes well for internal competition, rivalry last week at training was red hot. We are really ready to go.

Q: What about your preparation? How is the body? Are you ready to go full beast mode in September?
A: Body is feeling great, no excuses today. You never take an AFL game for granted. Something special about September as the weather warms up and you know when you are well and truly alive.

Q: The Pies are playing an exciting brand of footy and they’re there every single minute of this game. What are you expecting out there this afternoon?
A: They are all duck and no dinner. We do our things right and goes a long way to winning the game. Amazing season. So many wonderful players and they have executed at the right time of the year. So we need to be at our very best to match them.

The Cats head into this contest in scintillating nick, having claimed the minor premiership after winning their last 13 games.

In fact, they finished on top of the ladder by two games, such was their dominance in the second half of the season.

And they’ve got the wood over the Magpies as well, having won six of their last eight meetings, including the last three.

The last time these two sides met in a final was the 2020 semi-final at the Gabba which Geelong won by 68 points.

A theory about Geelong’s inability to play well in finals was that they don’t play well at the MCG. Well, they’ve put that to bed in the last few years, winning eight of their last nine games there.

It has been a remarkable achievement which no other team in the 126-year history of the league has done before.

The Magpies’ record at the MCG is also spectacular, having won their last nine games at the venue.

Q: It is a game of backs versus the forwards tonight.
A: It is, many parts of trying to get territory. We’ve been smashed around contested ball and clearance of late. Trying to get the ball inside 50 is the first part of that.

Q: Your youth, you’ve brought something out of the youth in Collingwood we haven’t seen for a couple of years. They’re playing on instinct.
A: We encourage the players to play on strengths. Beau McCreery, Jack Ginnivan, the fans love him. We want them to play with freedom and make mistakes. The key criteria is to go for your kicks, if it doesn’t work out, go fix it.

Q: I know you’re a lovely man but I didn’t know you had the power to turn Collingwood haters to love Collingwood. You’ve done that this year.
A: I have heard that, I’m not sure where that’s come from or who is driving it. I said to the playing group, we want to connect with the community. I haven’t been here a couple of years ago, no crowds, big part of our group was to connect back to the fans. 100,000 members this year, awesome achievement. We thank them.

Q: You said the last time you played Geelong was the turning point for the football club. You took good learnings out of it.
A: One of them was taking the ball over the boundary line. We tried to keep the ball alive too much in that game. They’ve improved a lot, you’d like to think we have. Those lessons we learnt in round three, we carried for the rest of the year.

Q: Another sellout at the MCG. 90,000 odd expected in the house today. How are the boys feeling?
A: It is an exciting time of year. The weather says it all. Spring is on. Finals footy is around the corner. We’re here now. A lot of excitement, buzz, around the whole state. We’re excited to get the game underway.

Q: This is unique for yourselves and Richmond, being so close to this great venue but you get amongst it on the walk over.
A: We do. We started it back in 2018. Giving the foot traffic and even the traffic with the cars after the games, took longer to get back. Now we enjoy the build-up, walking over and then post-game you get to share it with the fans after. It’s good.

Q: Preparation is key for any game but what are you like pre-game? Cool, calm, collected? Or intense?
A: It’s probably fluctuated over the years. I used to build myself up and get wound up but now I’m the complete opposite. Float around the change rooms, get outside, have a kick around. Relatively relaxed but when you run out, that’s when I start get going.

Q: Seventeenth to fourth in the space of 12 months. What do you put the rapid rise down to?
A: A remarkable amount of belief in the group. We felt the lists were strong. A lot of change throughout the whole club. ‘Fly’ (coach Craig McRae) and the coaching staff have been so good, implementing a brand new game plan. Defend similar but the way we move the ball is different and more exciting I’m sure the fans are happy.

Q: Keys to the Cats?
A: Defensively we have to be strong. They’ve got the greatest forward line this year. We feel like in our ball movement, get it off the line and shift their defence because they’re right up. 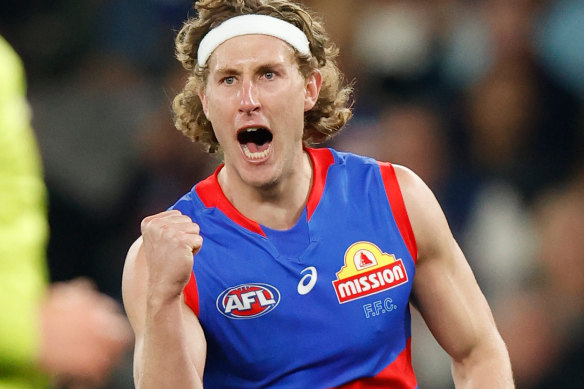 ‘I don’t think we have seen a better season’: Matthews praises 2022 campaign

AFL legend Leigh Matthews has praised the closeness and drama of this season calling it the “best we have seen”.

Matthews believes the quality of the finals and the competitiveness of the premiership race has made the 2022 campaign one to remember.

“I don’t think football has ever been any better than it’s been in 2022,” Matthews said on 3AW on Saturday.

“I don’t think we’ve had a better season, ever.”

Hello and welcome to our live coverage of a massive Saturday of AFL finals action.

To kick things off, we head to a sold-out MCG where minor premiers Geelong face 2022 Cinderella story Collingwood in the first qualifying final.

And then later tonight, we enter sudden-death mode as Fremantle take on the Western Bulldogs in the first elimination final at Optus Stadium. 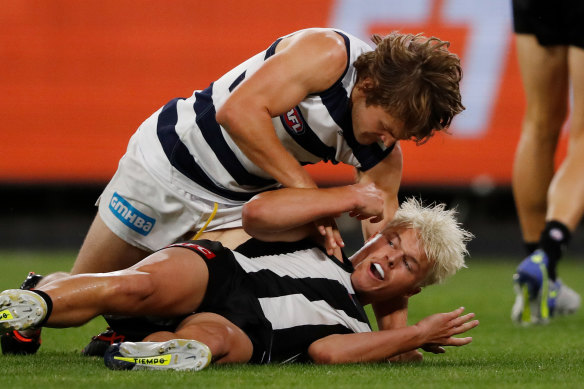