The stories behind the AFL’s weird but accurate goalkicking techniques

Josh Kennedy stutters. Ben Brown raises the ball in front of his face like the Lion King presenting his cub to the world, goes back as far as a fast bowler and runs dead straight at the goals. A rule was relaxed to allow for Lance Franklin’s “natural arc”. Jack Riewoldt needs to line up the goals with his left eye. And Steve Johnson pioneered the “Stevie J”, the set shot kicked around his body now practised by footballers from the AFL to under 12s.

Football coaches, like cricket coaches, try to teach players to perform a classic technique. Ironically few of the best, or most accurate, goalkickers in the game have techniques that resemble one another. They find their own way.

Respected veteran assistant coach David Wheadon’s illuminating book The Art of Goalkicking shines a light on the dark art of the players who can consistently do what so few others can – kick accurately for goal.

Here’s how they do it.

Jeremy Howe recently feared he had lost his greatest physical asset – his ability to leap and take a spectacular mark.

The senior Magpie had barely missed a game from his debut with Melbourne in round 11, 2011 to round four of 2020 before injuring his knee against GWS in season-ending fashion. 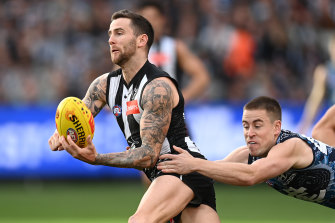 Jeremy Howe says he has full confidence in his body.Credit:Getty Images

He returned for the opening game of 2021 and played five matches before injuring his hamstring against West Coast. A decision four weeks later to have surgery has been the catalyst for a renewed confidence in his body.

“It was really difficult for myself,” an honest Howe tells The Age and Sydney Morning Herald about his two injury-plagued years.

Darcy Cameron has filled an important hole with Brodie Grundy out of the side, but faces one of footy’s toughest tasks up against Max Gawn today.

Welcome to the Big Freeze

Good afternoon! Welcome to our Monday Queen’s Birthday footy blog, covering all the action today from the MCG.

Damien Ractliffe to take you through all the celebrations, from the Big Freeze pre-game, through the four quarters of football, and all the fall-out post match.

It’s Collingwood v Melbourne, with the first bounce at 3.20pm.