This year's AFL match in China – St Kilda's "home" clash against Port Adelaide – has been relocated to Marvel Stadium due to concerns surrounding the coronavirus and will now feature "a celebration of Chinese culture".

It will now be played as a twilight match in round 12 on Sunday June 7, on the eve of the Queen's Birthday public holiday in Victoria and South Australia.

The Saints-Port game had been scheduled for Shanghai's Jiangwan Stadium on May 31 in round 11, but the expedition was officially cancelled on Wednesday.

The teams will instead have their bye moved to that week and will face off the following weekend. 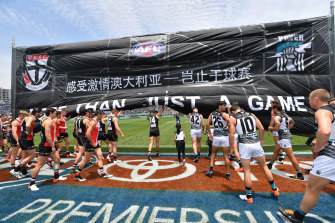 St Kilda and Port Adelaide will play at Marvel Stadium instead of Shanghai due to the coronavirus outbreak.Credit:AAP

The AFL said the new fixture would feature "a celebration of Chinese culture in an effort to encourage visitors to come together in support of our Chinese communities".

Worldwide, more than 90,000 people have now been infected and 3100 have died from the virus that originated in China.

AFL fixture boss Travis Auld said the AFL had acted on advice from the Australian and Chinese governments and the World Health Organisation.

"The health of people is an unacceptable risk, therefore the decision has been made to relocate the game to Melbourne," he said.

"It's not easy to relocate games, it's not something we've done before, [but] with the support of the Victorian government … we've been able to make the decision quickly and swiftly."

Minister for tourism, sport and major events Martin Pakula said while it was a shame the event wasn't going ahead, he was pleased Victoria had secured the match.

"As someone who went to the China game last year it is a wonderful event … but in the absence of it being played in Shanghai, I appreciate the AFL giving us notice as soon as they made the decision.

"The only appropriate option for this game is to have it here in Melbourne."

The pre-game entertainment will be a celebration of Chinese culture to try and counteract the negativity being directed towards Melbourne's Chinese community and restaurants, which could include line-dancing, costume and food.

"There's been a real downturn in business. The Chinese community has endured some really unfortunate, unwarranted attention from some quarters," Pakula said.

"We don't want the fact that the game is not being played in China to in any way diminish or reduce the relationship that the AFL, [clubs and government] has started to build up with China's community, so we're going to make this game a real celebration."

Tickets purchased for the China match will be refunded, and tickets for the new scheduled timeslot will go on sale through Ticketmaster shortly.

Auld said the financial impact on the league was not yet known, but that there would be a loss.

Both clubs have also taken a hit but tried to direct the focus on the more significant loss to the Chinese.

"We're still working through that. It's clearly as you get closer to the game, the costs go up, so at the moment, it's reasonably well contained," Port's chief executive Keith Thomas said.

"Our thoughts have been largely with the friends we made in Shanghai, China, they're really struggling."

"Just like other sectors … we're not alone in feeling the impact of this, but certainly we've been really encouraged by the willingness of our partners to stand with us in standing beside the Chinese community," he said.

"It's a great opportunity to certainly have a great game commercially, but ultimately it's bigger than that and it's about standing beside the Chinese community."

Auld said while the AFL expected the season to open in two weeks time as usual, it was prepared if the advice changed going forward.

"If any information changes then our fans should be assured that we will be well prepared," he said.

"There's some uncertainties and all we can do is best plan for what we know right now."