The AFL’s integrity unit is investigating after an Adelaide supporter was accused of directing a “racially motivated comment” towards Carlton defender Adam Saad on Saturday night.

The Carlton cheer squad Twitter account claimed that a Crows fan attending the Blues game had racially harassed the Blues defender by calling him a “terrorist”.

The tweet said the spectator was approached for questioning by South Australian police, as well as stadium security and staff following reports of the situation, but was allegedly permitted to remain in the stands.

“Cops, security, ground staff ‘talk to her’ and say ‘it’s been dealt with’ and tell us to leave it at that and she isn’t even kicked out of the ground,” the tweet read.

Local police said they were made aware of an “alleged offensive remark” by a member of the crowd at the game on Saturday.

“Police and Adelaide Oval security attended the area and obtained details of people alleged to be involved in this incident,” a police spokesperson said. 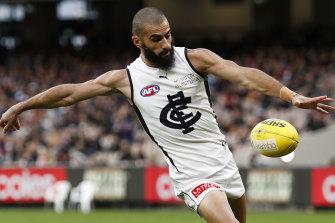 “The matter has been referred to the AFL and Adelaide Oval SMA for investigation.”

The incident remains under active investigation, according to the Adelaide Football Club, the stadium and the league’s integrity unit.

“The AFL is currently investigating alleged comments made by a spectator at AO last night,” the league said in a statement.

“Football is a place of inclusion and belonging and there is no place for racist behaviour in our game.

“Nobody in our game or in the community deserves to be discriminated and vilified against due to their faith or race and there is simply no excuse for it.”

The Crows said they were attempting to confirm details of the allegations, including whether the spectator was a club member.

“The Adelaide Football Club is investigating reports of an alleged racially motivated comment made by a spectator during Saturday night’s game against Carlton,” they said on Sunday morning.

“We do not tolerate and strongly condemn any form of discriminatory behaviour, and it has no place in football or society. Adelaide Oval should be an inclusive and family-friendly environment.”

A Carlton spokesperson said the club’s integrity officer contacted the league’s integrity unit after the game. They said they would await the league’s verdict before responding to the allegations.

The Adelaide Oval has launched an investigation into the behaviour of the patron, alongside the AFL.

“We will be reviewing the matter with the AFL and Adelaide Football Club to consider any appropriate sanctions and/or stadium ban,” a spokesperson said.

“We condemn all anti-social behaviour and have strict guidelines for all patrons.”

Saad, a former Essendon player, joined the Blues in 2020. An Australian Muslim, the 28-year-old has stood against racial discrimination, including in 2018 when he and fellow Muslim player Bachar Houli tossed the coin alongside the team captains in a sign of solidarity after the inflammatory anti-immigration remarks of Senator Fraser Anning.