The top two are locked in for finals, with Brisbane securing the minor premiership and Melbourne coming agonisingly close to stealing it, falling just 0.3% behind the ladder-leaders after their 78-point thrashing of West Coast on Saturday.

The Lions continued their dominant season with a 45-point win over Collingwood on Friday, keeping the fellow top eight contenders to just one goal, and finishing with a percentage of 282.4.

Melbourne held the Eagles to just one behind and put down a comprehensive victory, which featured nine different goalscorers, bringing their percentage to 282.1. 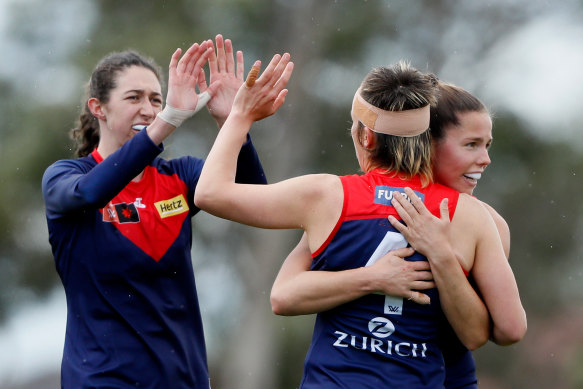 Melbourne finish in second spot on the ladder.Credit:Dylan Burns/AFL Photos via Getty

To add to the drama, with the Demons only needing one point the ball was in flight towards Karen Paxman in the Dees’ forward 50 as the siren blew, but it was too late – their second spot was cemented.

Melbourne captain Daisy Pearce said the side wasn’t concerned with percentage and did what they came to Casey Fields to do.

“We came here to lock up a top two spot and we’ve done that,” Pearce told Fox Footy.

“Hopefully we won’t need the double chance but we’ve gotten used to missing out by small percentages over the history of the competition.

“But more importantly just the way we’re going about our footy at the moment, the way we’re defending and the coaches did a really good job just to set us up with really clear focuses about what we can do in any given moment and break down what our goals were today. So, it’s funny not being on our mind today the percentage thing.”

Last season Melbourne ended Brisbane’s hopes of going back-to-back, knocking them out by four points in the preliminary final. Now, the two are heading into finals as grand final favourites.

Adelaide are looking to hold on to their top three spot after a rocky first half against St Kilda on Saturday, kept goalless by the Crows until half-time.

The reigning premiers looked to be lacking in confidence and composure for the first half of the game but managed to switch it on in the second, where Danielle Ponter and last season’s leading goalkicker Ashleigh Woodland kicked two each and gave the Crows a 16-point win.

Had they lost and Richmond won on Sunday, they would have been bumped down to fourth place and potentially dropped out of the top four on percentage after Geelong claimed a mammoth 75-point win over Sydney. 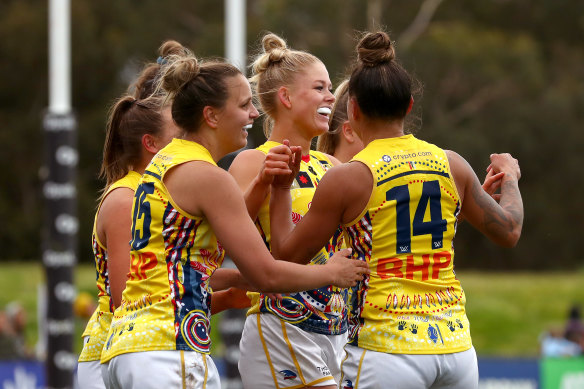 Adelaide coach Matthew Clarke said he thought the first half was “pretty poor”, including lacking in pressure and ability to move the ball forward, but was happy they turned it around.

“Credit to St Kilda, they brought energy, pressure, they were using the ball well and we were probably a little off our best, but the ability to respond and get an outcome was really good,” said Clarke.

“Obviously it was significant in the context of the season. To get top four is a great result … in the end, very happy to get the win”.

While the Crows walked away with the four points, the Saints can be proud of a gutsy effort against a top-tier side. Molly McDonald (20 disposals), Georgie Patrikios (17 disposals and four tackles) and skipper Hannah Priest (15 disposals, five clearances and two tackles) had impressive games.

It was an uneven match up at GMHBA Stadium on Saturday afternoon as Geelong, who are the hunt for a top-four finish, took on Sydney, who have now lost 10 matches in a row.

Unsurprisingly, the Cats were dominant with a whopping victory and came close to booting the highest score in AFLW history – 107 points and held by Melbourne – as expansion side Sydney finished their first season in the competition without a win.

The margin helped to bolster Geelong’s percentage to 173, which could make the difference in getting a double chance in the finals. They’ll need Richmond to beat North Melbourne on Sunday, but with a small enough margin to stay below theirs (current percentage at 154.7).

Against the Swans the Cats had a club-best performance, winning the ball at clearances and stoppages and controlling it around the ground. They got more hands on it with 128 more possessions and locked in their attacking half with 38 inside 50s to 22.

This gave them more avenues to goal, including through powerful forward Chloe Scheer, who booted a career best four goals, while Kate Darby, Jacequeline Parry and Shelley Scott all kicked two each.

However, fans have an anxious wait for news on Prespakis, who had a bad fall on her ankle and came off in the fourth quarter looking emotion and in quite a bit of discomfort. 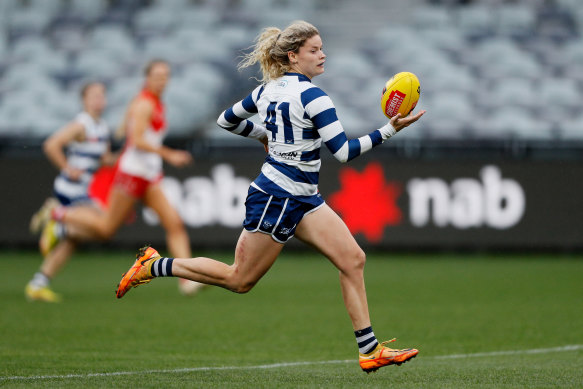