One man allegedly bit a police officer and a teenager is expected to be charged with assault as more than 50 fans were ejected from the MCG for bad behaviour on Saturday night.

Victoria Police has blamed some fans “pre-loading” on drinks and coming to the game drunk after several incidents at the ground on Saturday night, including two fans being fined for running onto the field during the Richmond and Essendon Dreamtime at the ’G game.

Inspector Jamie Templeton called on fans to improve their behaviour after two officers were allegedly assaulted during the match. 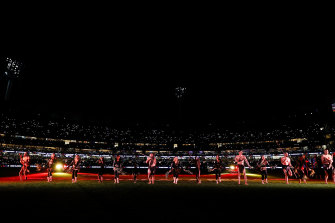 More than 70,000 fans attended Dreamtime at the ’G.Credit:AFL Photos

He said police would be talking to the MCC and the licensee after the incidents, which could result in alcohol availability at the stadium being limited.

“Tens of thousands of football fans attend matches every week and the vast majority support their team and enjoy the atmosphere safely and responsibly, so it was disappointing to see so many spectators engage in disruptive behaviour last night,” Templeton said.

“We did see what appeared to be higher levels of alcohol consumption and aggression. It was noticeable that ‘pre-loading’ of alcohol prior to the game was significant in contributing to more incidents of poor crowd behaviour than usual.

“Police, Melbourne Cricket Club and the licensee work together to manage alcohol consumption at the ground, including reducing alcohol availability. The responsible service of alcohol is actively monitored and supported by police at liquor outlets.”

A 21-year-old man was found intoxicated at a food stall and escorted away, but he allegedly became combative when police were helping him leave the stadium.

He is alleged to have bitten an officer while being led out and is expected to be charged on summons with assaulting police and an alcohol-related offence.

A 36-year-old man was arrested and OC (capsicum) sprayed by police after he allegedly punched an officer who approached him about urinating outside the venue. He is also expected to be charged on summons.

A 19-year-old Drouin woman is also expected to be charged with assault and intentionally causing injury after reports of an alleged assault near one of the entry gates in the lead-up to the game.

Two 31-year-old men were evicted from the ground and issued with $363 fines respectively for entering the playing field at quarter-time near the Ponsford Stand.