It is hard to know where to start with the Wallabies’ spring tour debacle but let’s try a lament. It did not have to be this way.

Poor communication from all parties – from players to coaches to executives – has turned what was a disappointing development into a full-blown embarrassment for Rugby Australia, a firestorm for the players and a selection crisis for Dave Rennie.

It was the players’ decision to withdraw from the tour. Let’s get that straight.

Two sources told the Herald that Japanese club Suntory gave Sean McMahon and Samu Kerevi their blessings. In the Japanese way, it likely involved some ambiguity, which could have sounded something like “We’d like to have you involved in our pre-season, but we understand representing your country is a great honour and we are happy for you to go”.

Eddie Jones, England coach and Suntory consultant, makes a delightful villain but it is stretching credibility to brand him the puppet master on this occasion, despite having much to gain if Australia lost another two from their starting line up a fortnight out from a visit to Twickenham.

Star centre Kerevi was tired after a long Japanese season, an Olympics campaign and a Rugby Championship. He picked up an ankle injury in the Test against Argentina and is three weeks off being back on duty in Japan. 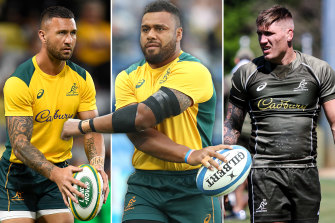 Quade Cooper, Samu Kerevi and Sean McMahon are all returning to their Japanese  clubs and missing the Wallabies’ spring tour.Credit:Getty, Getty, Supplied

McMahon wanted to stay in Japan with his family. A scroll of his Instagram account reveals his pain over being separated from his wife due to COVID-19 restrictions when she gave birth to their second child 10 months ago. Another month on the road might have been a bridge too far from him personally, despite the lengths he went to for a bench cameo against Argentina earlier this month.

It is hard to know Quade Cooper’s mind but, at the age of 33, and with the 2023 World Cup still two years away, he might have self-preservation high on his priority list. His club, Kintetsu, is yet to notify the Wallabies but national team management was opening talks with Kurtley Beale about flying over from France as a replacement playmaker.

Kerevi, McMahon and Cooper have a League One (formerly Top League) pre-season to start in coming weeks.

These Japanese spells are not “sabbaticals”, it should be remembered. Suntory (Kerevi, McMahon) and Kintetsu (Cooper) are the players’ employers. World Rugby’s Regulation 9 allows Australia access to them for a three-week window every July and November, but the players would be reckless to ignore the wishes, stated and implied, of their paymasters. Many have clauses in their contracts stating if an injury is incurred playing for another team, then the Japanese deal can be terminated. It follows that the Wallabies must walk a careful line in those cases. Which they have endeavoured to do.

For example, RA will not be pursuing their rights under Regulation 9 with the Japan Rugby Football Union or World Rugby.

At some point, Kerevi, McMahon and Cooper indicated their availability for this tour. One source said it was not mentioned to them until the final week of The Rugby Championship, which is short notice. But why allow the Wallabies to name you in the spring tour squad if you are in such doubt about whether you should go, or whether you want to go?

The players could be accused of people-pleasing behaviour at the very least. Wanting to play for Australia, wanting to please their clubs, their families, themselves and the Wallabies coaching staff. Unable to call it when they should have. To give everyone a chance to make other arrangements.

But RA chief executive Andy Marinos went a step further on Tuesday when he raised the issue of honesty, calling for the players to be more upfront in their dealings. The comments won’t be forgotten.

“We just expected a more honest approach, right from the beginning, if it was not their intention to travel,” Marinos told the Herald. “If there was an inclination they were not going to tour, we would have appreciated it a lot earlier. At the time, when they were told they were going to be selected on that tour. It’s disappointing that it’s taken this long.” 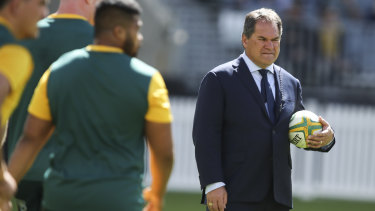 A pertinent question is how much pressure the players were put under by Wallabies staff. Were there threats of non-selection going forward? No one could answer that question on Wednesday.

Director of rugby Scott Johnson has long wanted to reduce the influence of agents in contract negotiations. He appears to have got his way in this saga, with the three players negotiating directly with Johnson and Rennie who, in turn, were in almost daily contact with the Japanese clubs. For all the good it did them. Someone, it is clear, needed to tell it straight.

With that set of circumstances, the prudent thing to do could have been to bracket their names, or brief media that there was some doubt over their inclusions. That way, their withdrawal would not have been the bombshell it was this week.

The bigger picture here is what happens in the future? RA’s rugby committee, comprised of Marinos and board members Phil Waugh and Daniel Herbert, is under pressure from different camps about what they do with Australia’s Giteau Law policy.

There will be howls of indignation about the value of a Wallabies jersey, accusations of entitlement or mercenary behaviour.

But it’s 2021 and the balance of power has shifted. Rugby Australia cannot afford to keep all of their top stars on home soil and populate a credible five-team professional competition and bring through the next generation and expect to have everyone they want for every Test.

Next year England tour Australia for a three-Test series in July. Realpolitik would see Rennie and Johnson target that series and The Rugby Championship, with the spring tour re-branded a development exercise.

There are lessons to learn on all sides. First, however, after a damaging three-day saga, there are also relationships to mend.

Tags: Amateur, at, Australi, Hour, Rugby
You may also like
Latest Posts