Eels coach Brad Arthur has rubbished claims of mounting pressure at the club and has labelled the speculation around his job “crazy” given Parramatta are in the top four.

Talk over in-fighting, leaks to the media and the potential axing of Arthur have all come into the spotlight this week for the club as the Eels struggle once again in the back end of the season.

The Eels head into Saturday’s match against Manly having lost their last three matches, and a defeat could push them out of the top five for the first time this season. In 2020, the Eels finished in third, but lost three of their last five regular season matches before losing in the first two weeks of the finals series to crash out of the premiership.

Arthur said after being in the job for eight years now, he has accepted questions over his job will always be asked when the team is performing poorly.

“If you want me to be real honest, I think it’s crazy that we’re sitting here talking about my job,” he said on Friday.

“There are 12 teams right now that sit below us [on the ladder]. We hadn’t even played a game at the start of this year and there was already some conjecture around my position.”

Arthur was also quick to shut down suggestions of a rift between him and Parramatta’s football manager Mark O’Neill.

“The club does a very good job to give us a squad … I’ve never once complained in the eight years about the squad that we have to work with,” he said. “My relationship with everyone at the club is good. But when you’re losing things like this happen.”

This week has also seen rumours of contract negotiations between the club and skipper Clint Gutherson made public.

Rumours began to circle last week that Gutherson was seeking a deal of almost $1 million per season to recommit to the club. 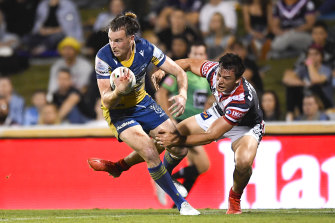 The Eels star shot down that figure before suggesting the speculation was part of a campaign to destabilise the club.

Arthur said the negotiations were not a club priority at this time, but believed Gutherson would remain at the Eels beyond the 2022 season.

“What I do know is that Gutho is comfortable at this club and the club wants to keep him here.”

Tags: Arthur, h, over, says, speculation
You may also like
Latest Posts