On an afternoon in which it finally felt like the football world had truly healed, Ben Rutten’s baby Bombers stunned Collingwood into submission to suggest their future – at least in the short-term – looks considerably brighter than that of their fellow traditional power.

The biggest crowd to witness a sporting event since the COVID-19 pandemic shut down almost every league in the world witnessed a clash between two significantly flawed and transitioning teams. But at least on this afternoon the Dons, who have all but admitted they are in a rebuild of sorts, showed that their foundations are sturdier than those of the Pies. 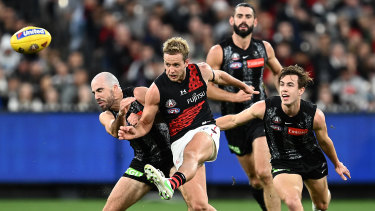 Darcy Parish shone in the midfield for the Bombers, winning the Anzac Medal for his two-goal, 42-disposal effort. Credit:Getty Images

Save for the very early moments of the game in which Collingwood burst from the blocks to kick the game’s opening three goals, and a stretch late in the third term in which the Pies held sway in the midfield, Essendon were the significantly stronger side. 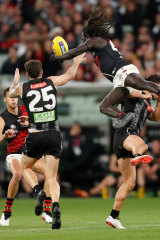 Anthony McDonald-Tipungwuti was a massive difference-maker for the Bombers.Credit:Getty Images

The Bomber talisman had a relatively subdued 2020 but issued a reminder on Sunday of his immense quality, coupling relentless pressure and devastating finishing to end the afternoon with five goals. It is not overstating things to suggest he was the difference.

Darcy Parish was the other Essendon standout. His game was much more one of death by a thousand cuts, 42 disposals and two goals to be precise, but he led the way in setting up incisive Bomber ball movement for much of the game. The sour note for Essendon was an ankle injury to defender Aaron Francis, who was subbed out of the game before half-time.

Collingwood are seriously undermanned, and their bottom seven or eight were badly exposed. The sobering reality was by afternoon’s end, the Pies were 17th on the ladder, and another week of chat about Nathan Buckley’s future beckoned.

Tip in or out?

Collingwood fans are well used to being on the wrong end of contentious boundary umpiring decisions at the City End of the MCG, and you can add this one to the file. McDonald-Tipungwuti had already been causing the Pies trouble when he tried to keep the ball in deep in the left forward pocket during the second term. The crafty Bomber did enough to satisfy the umpire, but replays showed the ball may have been out. In any case, McDonald-Tipungwuti threaded the needle to kick his third major of the first half.

The Dons had controlled play since midway through the first quarter, so when Will Snelling crept

into the protected area around the mark, allowing Will Hoskin-Elliott to be marched well into scoring range early in the second term, it allowed Collingwood an opportunity well against the run of play. The Pie duly converted. It was a costly moment, but Snelling atoned for his error only minutes later, snapping beautifully to neutralise the Hoskin-Elliott goal. While the “stand” rule has not seen the skies fall in, there have still been plenty of other cheap 50 metre penalties given this season. The Bombers benefitted too, with Jayden Laverde taking full toll after Trey Ruscoe encroached into prohibited territory later in the quarter to conceded another 50.

Clash of the titans

It had been one of the talking points leading into the game since both sides unveiled predominantly black Anzac Day jumpers for this match. There have been worse clashes in VFL/AFL history and while the Dons’ white shorts made a difference, it still wasn’t an ideal picture. Only the players could answer whether they were occasionally mistaken when identifying a player in congestion or on the other side of the field, but there were a handful of disposals that made you wonder. In particular, Parish’s kick inside at half-forward during the first quarter looked almost too well-weighted for those wearing black and white. For those who might have been confused on the day, that was Collingwood.

Tags: baby, Bombers, Buckley’s, Me, stun
You may also like
Latest Posts