Brumbies star Tom Banks is set to be the latest casualty as Wallabies coach Dave Rennie's selection axe falls in favour of Dane Haylett-Petty at fullback for Saturday’s third Bledisloe match in Sydney.

After wearing the No.15 jersey for Australia’s first two matches of 2020 in Wellington and Auckland, Banks’ name won’t be on the team sheet when the Wallabies name their side on Thursday. 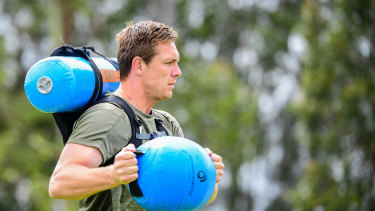 Banks has been in the shadows of Israel Folau, Kurtley Beale and Haylett-Petty in recent years, but it is back to the drawing board for the 26-year-old, who has played the All Blacks five times in his eight Tests since August 2018.

Haylett-Petty has been recovering from an adductor injury he sustained during Super Rugby and the Wallabies are adamant he is up to the rigours of Test footy, despite not getting any minutes during the past month. He last lined up at fullback for Australia against Wales at the World Cup before Kurtley Beale became Michael Cheika's preferred option at the back later in the tournament.

“I’ve been getting better every session,” said Haylett-Petty last week. “It was tough doing some rehab running on the sidelines and watching training.”

Haylett-Petty is one of the Wallabies’ best under the high ball and known for his knack of breaking the first tackle, plus his kicking game is improving.

With Matt To’omua out of the team due to a groin injury, Irae Simone is the likely replacement at No.12 based on comments this week from inside Wallabies camp.

James O’Connor hinted he would remain at No.10 rather than shift to No.12, while defence coach Matt Taylor said on radio this week that To’omua’s replacement would be a good communicator and Simone fits that bill perfectly.

“Whoever jumps into that [inside-centre] role we expect them to do the job and do it well with good skill,” Wallabies assistant coach Scott Wisemantel said.

However, Rennie’s first-team selections have shown he is not afraid to punt players if match form isn’t up to scratch. O’Connor's performance in the 16-16 draw in Wellington was polished but his kicking game at Eden Park, even by his standards, played into the All Blacks’ hands as the likes of Beauden Barrett and Caleb Clarke pounced in counter-attack. 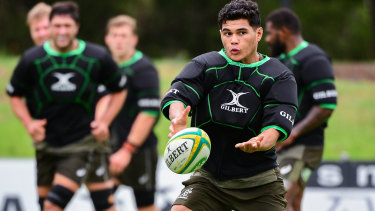 Noah Lolesio is yet to earn a Test cap. Credit:Stu Walmsley/Rugby Australia

Meanwhile, it is not completely out of the question that Rennie could hand Noah Lolesio a debut in Sydney at No.10, but it would be an extremely bold call and show of faith in the 20-year-old.

Selectors may see value in a Lolesio-Simone partnership at No.10 and No.12 given their effectiveness in Super Rugby AU for the Brumbies, yet with the Bledisloe Cup on the line, blooding a couple of first-gamers in such critically important positions would be audacious to say the least.

Then there’s Jordan Petaia. His cameo off the bench in Auckland, when To’omua left the field injured, wasn’t perfect but like he does so often, created something in attack with some clever passes and astute lines.

Petaia has the ability to create something from nothing and Australia's coaching staff would no doubt want to be giving him as many minutes as possible, providing his workloads are managed carefully.

In the forwards, Allan Alaalatoa is firming as Australia’s starting tight-head prop over Taniela Tupou in what is tipped to be an otherwise unchanged tight five given the group’s solid performance in Auckland.

Wisemantel, remaining tight-lipped as always about the make-up of the starting XV, said some selections had come about through favourable showings on the training paddock.

“When Dave came on he said selection would be based on form,” Wisemantel said. “Obviously now that Super has finished and they’re not playing games regularly, it has to be training. Shirts have been given out on the basis of training performances. On that basis, it means that everyone is a chance.”

New Zealand, ahead 1-0 in the series, need to win one of the next two Tests in Sydney or Brisbane to retain the Bledisloe Cup.

Tags: as, Banks, Haylett-Petty, SNUBBED
You may also like
Latest Posts