Waratahs No.10 Ben Donaldson says there was “extra fuel in the tank” to play well after criticism of his selection from Eastwood coach Ben Batger, who praised the youngster’s performance after initially labelling the choice to pick the playmaker as “crazy”.

The Waratahs suffered a heart-breaking 31-30 loss to the Western Force and still haven’t won a game this season but Donaldson was arguably the team’s best player in his maiden Super Rugby start. 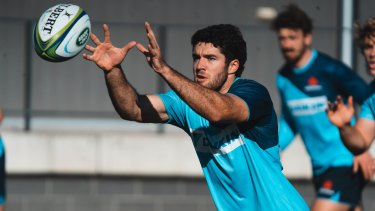 Ben Donaldson was one of the Waratahs’ standouts in their 31-30 loss to the Force. Credit:Waratahs Media

An injury replacement for Will Harrison, Donaldson’s position in the team was questioned by Batger, the former Waratahs and Brumbies representative, who believed his own playmaker at club level, Tane Edmed, should have been selected given he had been playing regularly and had played well throughout the 2020 Shute Shield.

“It’s a real bitter pill for me to swallow as his coach. What does he have to do to get the starting jersey?” Batger said of Edmed last week. “The Waratahs dig their own grave sometimes. They’ve only got themselves to blame for certain things.”

Donaldson said Batger’s comments upset officials from his club team, Randwick, but he was happy to use them as motivation.

“I saw [the comments] and people were talking about it,” Donaldson said. “I’m a pretty calm and chill bloke, so I didn’t really let it affect me too much. Me and Tane are great mates, so there was no hard feelings between either of us. The coaches were good about it as well. It gave me a bit more motivation to try and play well.

“The coach can say what he wants. That’s fair enough. He’s backing his player but that type of stuff puts extra fuel in the tank to go out and do your best.”

Batger was happy to praise Donaldson’s polished performance and made it clear his gripe was more with the Waratahs’ selection policy and not a direct criticism of the youngster.

“I thought Ben played really well on Saturday and congratulations on him for taking his opportunity,” Batger said. “If anyone read my comments I never actually criticised Ben Donaldson the player. It was more the selection process which I’m sure considering the season the Waratahs have had will probably be addressed post season.

“In this case Ben played great and the coaches got it right, so good on them.”

Donaldson has once again been listed at No.10 for Saturday’s match against the Melbourne Rebels but has another quad niggle – on his other leg – and will have to pass a fitness test on Thursday.

The 22-year-old is confident he will be right to take the field at Bankwest Stadium and reflected on a whirlwind week.

“Nerves were pretty high,” Donaldson said. “Once we got to Perth they kicked in because the most minutes I’d played last year was maybe 30 or 40 minutes. It was definitely a big change. Once I got out there it was unreal.

“Overall I was pretty happy. There was a few parts of my game that I was critiquing pretty hard, as players always do. Coaches were happy … just disappointing about the result.”

Arguably the highlight of Donaldson’s match was his drop-kick conversion from close to the sideline when he ran out of time to take the two points off the tee.

“I threw the tee away and had a crack. Luckily it came off. I was surprised. I don’t really practise those kind of drop goal conversions. It was pretty wide out and I couldn’t have hit it any sweeter.”

Donaldson wants to keep the No.10 jersey for the rest of the season but given he and Harrison are best mates, it will be interesting to see if he can do so when the latter returns in Super Rugby Trans-Tasman.

“People sometimes ask if we get annoyed or angry with each other. We don’t,” Donaldson said. “We really work hard together, try and push each other as much as we can. I know we play the same position and when he gets picked I’m happy for him and when I get picked he’s happy for me.

“It’s up to the coaches. Hopefully I can keep playing some good footy and put pressure on the coaches to pick me starting.

“As a team we’re still chasing that win and we believe this week is the week to do it.”

Tags: as, Batger, Donaldson, praises, Wa
You may also like
Latest Posts