The Bears are making an audacious bid to return to the NRL as its 18th team.

Just weeks after the Dolphins pipped the Jets and Firehawks for the game’s 17th licence, the foundation club has revealed plans to rejoin the top-flight competition, potentially as soon as 2025. The NRL has stated that expansion won’t necessarily end with the introduction of Wayne Bennett’s team in 2023 and the Bears believe they have a compelling case for a recall.

The new entity, which would be known just as the Bears, has just released a new logo and will remain based in North Sydney. However, rather than just being aligned to one geographical location in an already congested Sydney league market, the pitch is to take some home games to regional NSW areas, such as Dubbo, Coffs Harbour, Wagga Wagga, the Central Coast, Tamworth or wherever else the NRL sees fit. Resources would be allocated to growing rugby league in those regions.

However, there would be scope to play between four and six matches at the club’s spiritual home of North Sydney Oval, providing a connection to the club’s heritage.

The plan, which has been years in the making, was kept private in order for head office to focus on choosing the best Queensland candidate to join the competition. Now that process is complete, the Bears are going public about their hopes of coming out of hibernation.

“We want to be reintroduced as the 18th team, as a team of the people,” Dickson told the Herald.

“We think it’s the best rugby league story in 20 years.

“This is de-risking the growth of the game by re-engaging with 220,000 fans. If you start a new franchise, you have years of growing your fan base. This is an existing, 113-year national brand of heritage, heart and history. All we need to do is give it a platform.” 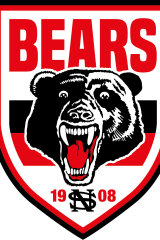 The new logo of the Bears, who are attempting to become the NRL’s 18th team.

The Bears were forced out of the NRL in 1999, reappearing briefly as part of the Northern Eagles in an ill-fated joint venture with Manly. They are now the feeder club to the Sydney Roosters, but believe they have the financial clout required to return as an NRL powerhouse. The North Sydney Leagues Club has pledged to back the bid as a long-term sponsor and partner, while investors have already indicated an interest in a private ownership model.

The Dolphins were required to stump up a $50 million bank guarantee for the first five years of their existence to prove they were financially stable. The Bears claim they can fulfil the same requirement.

“Absolutely, the No.1 consideration is around being commercially and financially viable,” Dickson said.

“The rugby league model needs to be enhanced to be sustainable long term. There is a real stigma about rugby league being a money pit, with people throwing money in there all the time. That needs to be broken and we wouldn’t put that on the NRL.”

Dickson said there were plans to build a centre of excellence in North Sydney and that the local council was prepared to upgrade North Sydney Oval to ensure it is of NRL standard.

“All of our people are saying bring back the Bears, but this isn’t just another Bears bid,” he said.

“This is different. The commercial viability is going to be there first, the structure of the business is there first. Otherwise, why would the NRL consider it?

“We are a team of the people and we just want to take it to the people. We have Bears supporters from Wagga to Mount Isa to Perth, they are everywhere.

“Unless the NRL has a desire for a 17th team with a bye for a reason, there’s no reason why this couldn’t be a 2025 initiative.”

Tags: Bears, bid, bold, come, reveal, to
You may also like
Latest Posts