Carlton slayed their third-term monkey and ensured there was no repeat of last year’s coach-killing loss, while heaping more misery on a free-falling North Melbourne, with a 50-point win at Marvel Stadium on Saturday night.

The listless Blues were beaten by seven goals when the teams last met in round 19 last year, all but stamping then coach David Teague’s card, but this is a more resourceful unit under Michael Voss.

Challenged by the Kangaroos in the second term, and leading by only eight points at half-time, the Blues booted 7.3 to 2.1 in a heated third quarter when Tarryn Thomas and Liam Stocker clashed heavily – the first time in seven matches this season the Blues have won the third term. 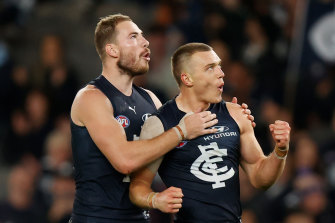 Stocker was soon subbed off with a shoulder injury, while frustrated Kangaroos forward Nick Larkey was reported for tunnelling Lewis Young. Larkey’s indiscretion led to a double 50-metre penalty and Jacob Weitering booting his first goal of the year.

While the struggling Kangaroos had only won one third term this year, the Blues’ response highlighted their greater maturity. The win improves their record to 5-2, ensuring they remain a top-four contender, while the Kangaroos slump to a 1-6 win-loss record. The Kangaroos have been the worst performed team in the league since 2020 and the pain is likely to continue.

The absence of the robust Marc Pittonet (PCL) for up to three months will hurt the Blues but perhaps not as much as many thought. While veteran Todd Goldstein was one of North’s best, the athletic Tom De Koning ensured the Blues still won the overall clearances and centre clearances. 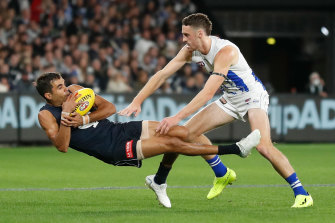 Carlton captain Patrick Cripps, with 21 disposals, including seven clearances, to half-time, finished with 34 touches in a best-on-ground performance, strengthening his Brownlow Medal hopes. On a night the Blues were without midfielder George Hewett and late withdrawal Zac Williams (Achilles), Sam Walsh and Matthew Kennedy were also busy in the midfield, while Adam Saad generated tremendous yardage from half-back.

The height and size advantage that Harry McKay and Charlie Curnow had over Aiden Bonar and Josh Walker loomed large all night and, ultimately, proved decisive. The pair shared seven goals and 17 marks.

Jason Horne-Francis, the No.1 draft pick, battled hard and his passion was on show when he remonstrated with Jack Silvagni in the third term. Jy Simpkin was also busy for the Kangaroos, who lack class and poise on most lines.

Blues supporters were outraged in the third term when debutant Jack Carroll appeared set to deliver De Koning a short pass in the centre square, only for the ruckman to collide with field umpire Eleni Glouftsis, the ball rebounding and leading to a Larkey goal. Glouftsis quickly jumped to her feet but Blues supporters were incensed, their jeers growing when Larkey converted.

All-Australian ruckman Goldstein, who had lost his role as the No.1 big man to Tristan Xerri but won a reprieve when Xerri could not play because of a foot hot spot, had a point to prove. He led the tap outs 12-9 in the first term and had eight touches and a clearance, and was in the thick of the action early in the second term when he grabbed the ball from a throw in and handballed to Cameron Zurhaar, who snapped truly. While Goldstein was busy, the same couldn’t be said for key Kangaroo Luke Davies-Uniacke, who had just the one touch to quarter time. But he also lifted after the break when the Kangaroos booted three straight goals to knot the scores at 33 points apiece.

Debutant Carroll’s first touch was one he won’t forget. Having received a handball from Saad, he was immediately crunched and forced over the boundary line by Thomas. However, minutes later there was joy when Carroll accepted a handball from Walsh and snapped a clever left-foot goal. 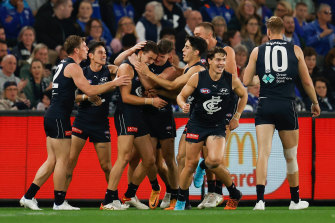 There was also a special first-quarter moment for Callum Coleman-Jones, the former Tiger turned Kangaroo. Axed after the round one loss to Hawthorn, he snapped his first AFL goal for his new club, but it was the Blues who had the advantage at the first change, due in part to a burst of three goals in three minutes. Debutant Kangaroo Miller Bergman, a late inclusion, had managed just the one kick before a shoulder injury led to his substitution in the second term.