The NSW No.6 jersey is Jack Wighton's to lose, with Blues officials leaning towards picking the reigning Dally M medallist in the halves ahead of Jarome Luai for Origin one.

It comes as the NRL begins to make contingency plans around the venue for the opening game of the series, which is scheduled to be played at the Melbourne Cricket Ground on June 9. 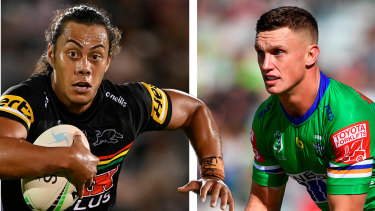 Jarome Luai and Jack Wighton are engaged in a battle for the NSW No.6 jumper, with the Canberra playmaker set to get the nod.Credit:Getty

The NRL is now considering triggering a backup plan to stage the opening game of the series at a neutral venue if a recent outbreak in Victoria prohibits a crowd from attending the match.

Sources with knowledge of selection discussions told the Herald that Blues coach Brad Fittler wants to include both Wighton and Luai in his 17, but has the Canberra five-eighth pencilled in alongside Nathan Cleary in the halves for the series-opener.

Heading into the final round before team selections, Luai is the frontrunner to secure the utility spot on the bench following the concussion to Ryan Papenhuyzen that has ruled the Storm No.1 out of calculations for the first game of the series in a fortnight's time.

Fittler will finalise his team over the weekend, with an official announcement to be made late Sunday night when the Blues begin to gather in Coogee for their 10-day camp leading into the Melbourne opener.

While Luai can primarily provide cover for the halves and hooker, the Blues have the ability to shift Wighton into the backline should they lose one of their outside backs to injury or concussion.

There's also a view starting Wighton over a rookie in the high intensity opening exchanges will serve NSW well, both in attack and defence.

Wighton has struggled to recapture his form from last year in an out-of-sorts Canberra side, missing last week's loss to the Storm through suspension after a tackle on Canterbury's Adam Elliott in Magic Round.

Wighton returns to the Raiders side for this week's clash against the decimated Sydney Roosters, with the Blues No.6 jumper now his to lose.

Possible NSW team for State of Origin I

Luai has been in sublime touch with the undefeated Panthers, but his combination with Cleary doesn't appear to be enough to give him the edge over Wighton for game one.

Luai has 14 try assists to Wighton’s three in 2021, while he also leads the statistics in tackle breaks, offloads, line breaks, line break assists and forced drop outs. Wighton has a better defensive record this season, however he did miss 14 tackles in the first two games of last year’s series defending in the centres.

“I love watching the Penrith halves play together because they’re just so exciting and they’re so new and fresh,” Fittler said in April.

“You realise State of Origin is a different game – Jack Wighton and Cody Walker have played it before – and having that experience definitely helps on the big stage.”

It appears Walker has dropped off the radar in recent weeks, however, on the back of South Sydney’s horror stretch of form that has seen the Rabbitohs concede 50 points to Melbourne and Penrith.

The Blues have a few selection headaches in the forward pack given recent injuries and suspensions. Victor Radley (suspended) is out of game one. Roosters backrower Angus Crichton will head to judiciary on Tuesday night but faces the prospect of being rubbed out of if he is unsuccessful. South Sydney lock Cameron Murray is also racing the clock to prove his fitness.

The injuries and suspensions have opened the door for the likes of Penrith's Liam Martin, Brisbane's Tevita Pangai Junior. Young Penrith star Matt Burton could be a bolter as NSW's 18th man.

"I think a lot of players are nervous, they don't want to make any [head] contact," Tedesco said on Tuesday morning. "It's for the consistency, if they're doing it in the NRL they'll do it in Origin I guess.

"That could be a different game in Origin. Momentum could swing very quickly if something like that did happen. We'll just have to see what happens.

"A lot of the times it's accidental and there's no malice in it, but you just can't do it, you can't make contact with the head because it's getting punished very severely at the moment. There's more awareness of being more controlled. I don't think it's about changing techniques, it's about being aware."

Meanwhile, Adelaide Oval has put their hand up to host Origin I as the latest COVID-19 outbreak in Melbourne threatens to put Victoria into lockdown.

At the launch of Indigenous Round on Tuesday morning, NRL boss Andrew Abdo said if the game had to be moved from the MCG the governing body would seek a “neutral state” to host the event – and not Sydney or Brisbane – in the name of fairness.

“We will be ready for whatever situation emerges,” he said.

“If we need to increase the protocols we will and if we need to consider contingency planning for where we play Origin I, we will. We would have to see a significant increase in the number of community cases and a potential lockdown for Victoria before we would consider that.”

After Abdo’s comments, four new cases were reported on Tuesday afternoon taking the cluster to nine.

A spokeswoman for Adelaide Oval said the venue would be delighted to be considered if the situation occured.

“We hope for everyone’s sake that COVID doesn’t result in the need for a change of venue,” she said.

“However, if it did, we would welcome the opportunity to discuss Adelaide Oval’s ability to host Game I.”

Tags: 'leaning, Blues, towards, Wighton
You may also like
Latest Posts