Carlton utility Jack Silvagni won’t play against Fremantle on Saturday, withdrawing from the side with an ankle sprain.

Silvagni was sent for scans on Thursday after injuring his ankle at training, and while the results showed no significant damage, he was ruled out of the Blues’ side after a fitness test on Friday morning. 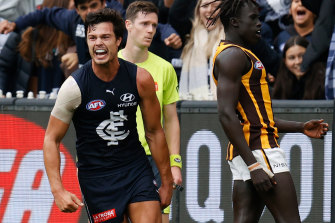 Jack Silvagni celebrates a last-quarter goal for the Blues.Credit:AFL Photos

“We were hoping it was going to be minor enough that he would come up – we assessed it this morning before we jumped on the plane (to Western Australia) and weren’t happy enough with where it was at so decided not to bring him over,” coach Michael Voss said in his Friday press conference, adding the Blues hoped Silvagni’s ankle complaint would only keep him sidelined for a week.

“Certainly it’s very much on the minor end of the scale, so given it only happened yesterday we expect it’ll probably settle down in the next few days, but we’ll probably have a further look at it come Monday, Tuesday.”

Versatile tall Tom De Koning will replace Silvagni in the Carlton side.

Voss said his group had “a really good chat” about their fadeouts during games, which haven’t yet manifested in a huge issue in the win-loss column as the Blues currently sit in sixth on the ladder with four wins from their five games so far.

“I don’t think we can sort of shy away that we need to become a little bit more consistent throughout the course of games,” he said.

“The good thing is that we’re really clear on what it looks like, and we understand we’ve still got a bit of work to do as a footy team.

“I always stated at the start that there were going to be some things in progress we needed to continue to address – we’d like it to not be as confronting as the way it turned up to be last weekend, but we’re confident enough with some sustained intensity that we can address some of those issues.”