Josh Eyre had long known he had an Indigenous background, but until late last year it didn't really affect his life.

Then in November, the Calder Cannons found out that the young tall forward's great-grandmother was Indigenous. The news was soon passed onto Essendon, who gladly accepted the Kilmore product as a member of the club's next generation academy.

Eyre couldn't believe his luck either. He'd grown up a mad Bombers fan, worshipping Matthew Lloyd and then basing his game around Joe Daniher who like Eyre is a left-footer. 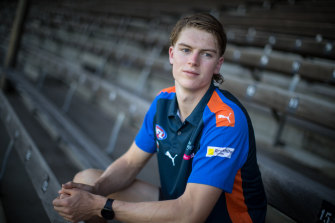 He spent a week at the Bombers last summer and was awestruck as he sat in the change rooms with his heroes.

Eyre had been keen to build on his bottom-age NAB League season but then COVID-19 hit and thwarted the plans of Victoria's top footy talent.

"I've sort of used it as an opportunity to build up my body and build up my speed and strength," Eyre said.

Eyre has had more luck than some other prospects though. A couple of years ago he felt disengaged at Kilmore's Assumption College and wanted a change of scenery. He'd discovered the Alex Rance Academy, suited to kids who are passionate about sport and exercise. His final two years of high school have been spent at the academy, based in Essendon and where students run around Windy Hill where Eyre's dad used to go watch the Bombers.

It's also meant that as Eyre tries to enter the AFL, he's had tutelage from one of the greatest key defenders of the generation.

"Obviously a very busy man. When he did come in he was great," Eyre said of Rance.

"He more focused on one-on-one contest work, because that's his strength."

Having finished school last week, Eyre is hoping to get into an exercise science course next year at Victoria University.

The school also opened Eyre's eyes to Indigenous affairs. Issues he hadn't previously considered started to filter into his mind.

"We knew we had a little bit of Indigenous [blood], but we didn't really look into it a whole lot," he said.

Come next Wednesday night, Eyre could be a Bomber. Not that the Dons' recruiting department have been giving him any hints about where they expect a bid to come for the 197-centimetre endurance athlete.

"I haven't really been told too much," he said.

There is a sense of romance to the idea that he could be a long-term replacement for Daniher, who departed to Brisbane last month.

"I guess we are sort of similar in a way. I base my game off him. I feel like I have traits that he has and I feel like I reckon I could fill that role. When I watched him I thought I could do that sort of thing," he said.

Essendon would be ideal, but Eyre knows there's a chance it mightn't work out. Hawthorn are coming to visit his family in Kilmore on Tuesday, and even the idea of a move interstate doesn't turn him off.

"I'd 100 per cent be down. It's the dream. I'd play anywhere. I just want to get that opportunity to be in that environment," he said.

Tags: Bombers, coy, Daniher's, Eyre, on
You may also like
Latest Posts