Western Bulldogs captain Marcus Bontempelli is planning to return for Friday night’s crunch clash with Collingwood but Melbourne counterpart Max Gawn is in doubt for a trip west.

Bontempelli was rested from Friday night’s loss against Port Adelaide because of a sore ankle that has troubled him since round one. But the inspirational skipper said on Monday he expected to return at Marvel Stadium, where the Bulldogs, with a 3-5 win-loss record, are fighting to remain in touch with the top eight.

“It got to the point where it was the short turnaround that probably cooked me a little bit,” Bontempelli said on Monday. 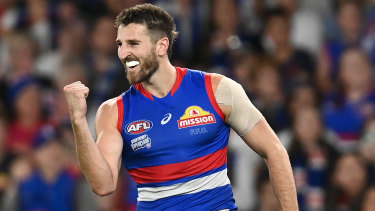 “This happens throughout the season and [in] your career, there are going to be times when you have to miss. It is unfortunate, obviously, with the result too but, yeah, I am planning to be there on Friday.” 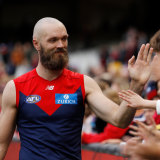 Bontempelli’s class on the ball and up forward were missed against the Power, with the Bulldogs having a nightmare clash. Not only were they beaten, but they lost goal-kicking half-forward Cody Weightman (broken collarbone), Laitham Vandermeer (high-grade hamstring) and defender Tim O’Brien (calf injury).

Weightman had surgery on Monday and is expected to miss up to three weeks.

“Cody had heavy side-impact when he performed a hip and shoulder,” said Bulldogs head of sports medicine Chris Bell. “This caused him to break his collarbone. We will confirm his plan in the coming days but expect him to miss the next two to three games.”

Bell said Vandermeer is expected to miss about eight weeks, while O’Brien will be absent for several weeks.

While Melbourne are intent on maintaining an unbeaten start to the season, they will be tempted to rest Gawn and defender Jake Lever for Sunday’s clash against bottom-placed West Coast in Perth.

Gawn was sent for scans on his knee on Monday, having hurt himself against St Kilda on Sunday, while intercept king Lever has a corked leg. Gawn, insisting he does not have a PCL issue, said he hoped to play this week, but he will be closely scrutinised by the Demons’ medical staff.

“I have had a pretty good start to the year,” Gawn said. “The first eight weeks have been pretty good. Yesterday (Sunday), it (knee) just got me a little bit in the second quarter but I played out the second half.

“I hurt myself in the second quarter in a rough contest with Paddy Ryder and then played out the game so it’s not that bad.”

St Kilda small forward Dan Butler has Achilles soreness, having been subbed off, and is in doubt to face Geelong on Saturday. However, Jack Billings, Jarryn Geary, Jarrod Lienert and Tom Campbell will be considered for senior selection, having impressed in the VFL.

Adelaide forward Lachlan Murphy will be assessed this week after he was subbed out with neck soreness in the third quarter of the Crows’ 48-point loss to Carlton on Sunday evening.

The 23-year-old was injured after a tackle from Carlton midfielder Patrick Cripps, which resulted in Murphy’s neck sustaining a sudden whiplash action.

Murphy underwent surgery during the off-season to fix a bulging disc, but has hurt his neck several times this season, including after receiving a high tackle late against Port Adelaide, which led to Jordan Dawson’s match-winning goal.

Sydney ruckman Tom Hickey made a successful return through the VFL in a 10-goal win over Werribee and is in the frame to return against Essendon on Saturday.

Hickey, who had not played since suffering a knee injury in round three, had 23 disposals, 27 hitouts and a goal as he looked to prove his fitness.

New NFL Power Rankings: 1-32 poll, plus which players benefited most from the draft
Recent Posts