Gold Coast Suns midfielder Jack Bowes will tour Essendon, Hawthorn and Geelong on Tuesday and then make a call on where he wants to play in 2023.

Bowes is being sought by the three Victorian clubs, who are eager not only to secure the midfielders, but especially to land Gold Coast’s pick No.7, which is on offer due to the Suns wishing to lose Bowes’ hefty two-year contract and create room for future acquisitions and retention.

Geelong, who are seeking to trade for Tanner Bruhn from the Giants and Ollie Henry from Collingwood – both second-year players from the Geelong area – have made a strong pitch to Bowes and, remarkably, the premiers have the cap space to accommodate the salary cap dump. 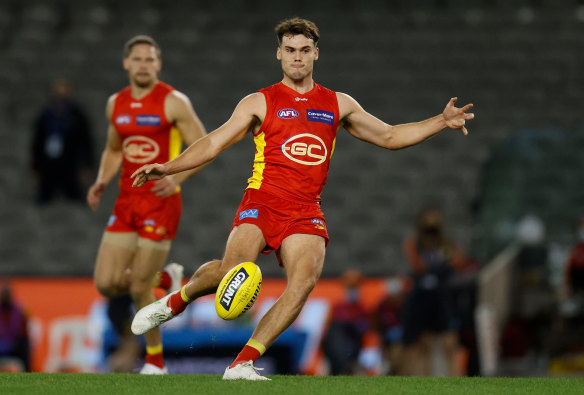 In demand: Gold Coast midfielder Jack Bowes will tour Geelong, Essendon and Hawthorn tomorrow and then make a call on his future. Credit:Getty Images

North Melbourne also had been interested in the Bowes deal, but the Sun has narrowed his choice to three clubs.

On a busy first day of the trade period the move of out-of-contract Giants midfielder Tim Taranto to Richmond was completed as forecast in The Age on Monday for picks 12 and 19.

Melbourne running defender Jayden has moved to West Coast as an unrestricted free agent. The Demons will receive a third-round selection, currently pick 52, as compensation.

Last year’s No.1 draft pick Jason Horne-Francis re-shaped the trade period when he told North Melbourne on Sunday night that he wanted a trade home to South Australia and specifically to Port Adelaide.

Out-of-contract Melbourne forward Toby Bedford will be traded to GWS, most likely for a late second-round or early third-round pick.

The Western Bulldogs and Brisbane remain some distance apart on a deal for Josh Dunkley to the Lions, with Brisbane offering their future first-round pick for the midfielder who won the Dogs’ best and fairest last week. The Western Bulldogs point to the trade of Taranto to Richmond as a comparable player and the compensation GWS received.

“His partner moved to Victoria earlier in the year, and he’s keen to get over to Victoria and be with her,” Bulldogs list manager Sam Power said.

“He is contracted. It’s really for Freo to guide that at the moment. Their stance has been pretty firm. I understand that. From our end, clearly, we would like to work through it through the course of the trade period.”

The Dogs will be re-united with key backman Liam Jones, who will return to Whitten Oval as a free agent after quitting Carlton over COVID-19 vaccination rules.

Premiership midfielder Lachie Hunter has been weighing up his future, but Power said Hunter had not requested a trade.

“Lachie is contracted for another few years … we expect that he will be at the Bulldogs,” Power said.

Power said free agent Zaine Cordy was on the market, but he hoped the defender remained at the club. Forward-ruck Josh Schache is out of contract, but Power said a new contract offer was not linked to whether the Lobb deal was completed.

Elsewhere, St Kilda list manager James Gallagher said running midfielder Bradley Hill remained a required player, but had to improve his consistency, while Carlton list boss Nick Austin said midfielder Paddy Dow was exploring trade options for more opportunity to play, but as a contracted player could yet remain with the Blues.

“He has shown the level of footy he has been able to play at VFL level. Obviously, our midfield has changed dramatically over the last 12 months, which has starved him off opportunity,” Austin said.

Carlton meanwhile announced a long-term deal for full-forward and 2021 Coleman medallist Harry McKay, who has signed a huge seven-year contract extension starting at the end of 2023.

Swan Jake Lloyd has also re-signed with the Sydney Swans.