Wallabies attack coach Scott Wisemantel, a former right-hand man of Eddie Jones in England, has backed the push to get his former boss back in Australia, saying it would benefit the game heading into the 2027 Rugby World Cup.

Wisemantel is a friend of Jones, having worked under the England coach as an assistant in 2018 and 2019. They also worked together when Jones was coach of Japan at the 2015 Rugby World Cup, where they famously rolled South Africa.

The well-travelled Wisemantel returned home to join Dave Rennie’s Wallabies staff in 2020 but keeps in contact with Jones. The pair had lunch at the weekend.

The Herald revealed last week that Rugby Australia had made contact with Jones about returning to Australian rugby in an unspecified role when his contract with England expires at the end of 2023. Asked whether he would like his former boss back in Australia, Wisemantel said: “I would love to have Eddie back in Australia.”

“In what capacity I don’t know, but he would be great for the game heading into ’27; just the way he promotes the game, the way he drums up business from your end (media) and interest. I am biased because I am mates with him, and I have worked with him,” Wisemantel said.

“But at the same time, and I want to make this really, really clear so you can’t draw the bow that Wisemantel wants Eddie Jones back (as Wallabies coach), I think Dave Rennie and this coaching staff are exceptional. 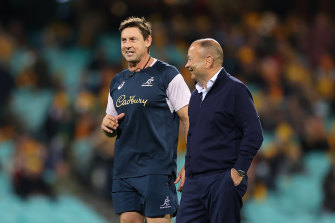 “So in what capacity, I don’t know. It could be in an ambassador’s role for Australian Rugby Union. But it would be lovely to have Eddie back.”

Jones’ interest in a return is yet to be formally gauged, but sources indicate Rugby Australia will have to lobby hard. Asked if he was aware of Jones’ interest, Wisemantel said he “wouldn’t have a clue”. During their weekend catch-up, the pair discussed only rugby.

“That was it. It is never about the future and ambition and where you want to go and who you want to coach. That has never, ever been part of it,” Wisemantel said.

Wisemantel and the Wallabies returned to camp on Tuesday before their departure for Argentina, where they will play Michael Cheika’s Pumas twice. 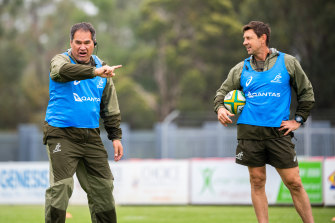 Wallabies coach Dave Rennie and assistant Scott Wisemantel watch on at training in the Hunter Valley in 2020.Credit:Stuart Walmsley/Rugby Australia

Alongside Jones, Wisemantel made plans to beat Cheika’s Wallabies several times, including in the Rugby World Cup quarter-finals. But after studying Argentina’s victory over Scotland in their July series, Wisemantel said it was not as simple as dusting off an exercise book marked “Cheika plans”.

“You are always going to have philosophical points you can lean on but Cheika has changed, with his assistants,” Wisemantel said.

“You look at coaches with longevity in any code – [Kevin] Sheedy, [Craig] Bellamy – I look at those sort of coaches. They all evolve by turning over their assistants, and ‘Cheik’ has done that as well.

“I think what he is doing and he is doing it really well, is relying on the attributes that set some of his players apart, whether that’s through power or skill, and then mixing it up. They played really well in that series against Scotland. 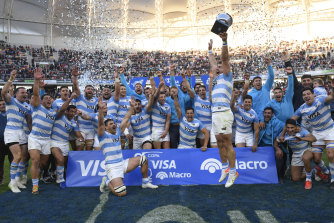 Argentina celebrate after winning the Test series against Scotland.Credit:AP

“They are playing a lot more rugby, they are holding the ball for a lot longer periods and they’re doing really well, so they’ll test our defence.”

Wisemantel said the Wallabies will “review hard” the third Test defeat against England, but said the obvious lesson was the need to seize every chance to score after bombing two tries in the opening 10 minutes.

“The biggest difference between Super Rugby and Test level is at Test level you probably get four chances in a game. You have to take them. It is a good learning curve and something we have to be better at,” he said.

The returns of Quade Cooper and Jordy Petaia, and the departure of Samu Kerevi for sevens duty, will likely see a major back-line reshuffle but Wisemantel said selections for the first Test in Mendoza were in the air and would be based on training form.

Watch every match of The Rugby Championship on the Home of Rugby, Stan Sport. All streaming ad-free, live and on demand.