Brumbies coach Dan McKellar has bolstered his depleted front row for the top-of-the-table clash with the Reds, bringing star Wallabies Allan Alaalatoa and Scott Sio back into the 23.

McKellar has been without Sio (back) and Alaalatoa (suspension) for several weeks and only welcomed James Slipper back into the side a fortnight ago, leaving the Brumbies short up front. 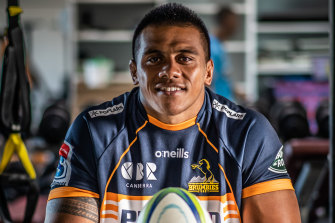 Allan Alaalatoa will start for the Brumbies on Saturday night.Credit:Karleen Minney

Alaalatoa will come straight back into the starting XV and Sio will come off the bench in Slipper’s place in the second half, giving the Super Rugby AU premiers a timely boost before facing the Reds’ powerful pack on Saturday.

Darcy Swain’s inclusion in the second row is the only other change to the starting XV that escaped the SCG with a two-point win on Friday night.

The Reds, in contrast, have made no changes to the starting XV that thumped the Rebels and kept their undefeated season alive on Saturday. 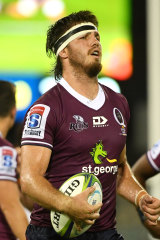 There is a noteworthy inclusion on the bench, with Liam Wright to play his first game of the season after injuring his ankle in the preseason.

Rebels coach Dave Wessels has made five changes to his 23 for Friday’s clash with the Force.

Australia’s former sevens captain Lewis Holland will start his first Super Rugby match at inside-centre, veteran hooker James Hanson has earned a start in place of Jordan Uelese, and Rob Leota has squeezed Steve Cummins out of the starting side to line up at lock.

Holland’s inclusion has shifted Reece Hodge to fullback and pushed Tom Pincus to the bench.

The headline change for the Force is the return of Kyle Godwin, who will line up at inside-centre.

The Perth product hasn’t played for the Force this season after suffering a foot injury in preseason.

Tags: back, Big, bring, Brumbies, guns
You may also like
Latest Posts