Nathan Buckley was the serenaded figure in this Queen’s Birthday clash and football showed sentiment can rule when Collingwood willed themselves to a 17 -point win over Melbourne at the SCG.

This wasn’t one for the highlight reel in terms of the actual match spectacle for much of the afternoon but it did not matter for Buckley, the Magpies or their faithful as they bade farewell in fitting style to one of the greatest figures in club history.

While this match had been shifted from the MCG because of Melbourne’s lockdown, a crowd of 21,000 was a strong turnout in Sydney to see Buckley off. 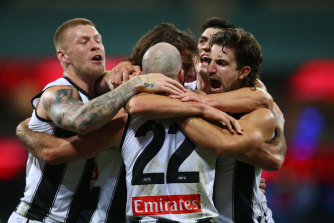 Veterans Scott Pendlebury and Steele Sidebottom as well as Jordan De Goey and Darcy Moore – four of the important figures in Buckley’s time as a coach – all performed well, while the robust Brayden Maynard was ferocious in his attack on the ball and man.

When Pendlebury converted a set shot midway through the final term to extend the Magpies’ lead to 19 points, the relief of giving Buckley a moment of joy in his 206th and final match in charge was obvious.

“I don’t think our effort was any more today … it was just fantastic to get a win for Bucks and send him off on a good note,” Pendlebury said after the Pies’ fourth win this season.

“Three quarter-time was pretty emotional … all I can say is he is a champion on and off the field.” 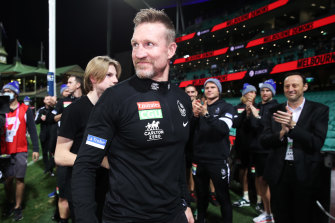 The Magpies led by 16 points at half-time but the Demons soon regained the lead. Prime movers Christian Petracca, Clayton Oliver and Gawn were busy, while Christian Salem provided drive across half-back.

However, the Magpies rallied to regain the advantage by the final break, and an emotional speech from Buckley helped propel his side to a win he – and the team – won’t forget in a hurry. 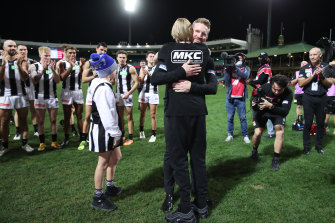 Brody Mihocek had lacked his typical punch in front of goal over the past month, managing just one goal in four matches. But he was able to regain his mojo in the second term and prosper from some clever passes from De Goey, marking on the lead and converting twice in as many minutes to give the Magpies a 16-point lead. De Goey was an influential figure in the quarter, whether that be on the ball or up forward. He was again in the thick of the action when he sharked a tap, spun through a tackle and handballed to Beau McCreery, replenishing the Magpies’ lead after Luke Jackson’s left-foot snap had cut the deficit. De Goey had 19 touches, including four clearances, to half-time, prompting tagger James Harmes to be sent to him with five minutes remaining in the term. 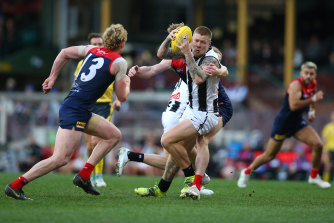 Much has been said about Oliver’s hard running, selfless manner and his willingness to kick the ball more this season. But one point overlooked when it comes to the Brownlow Medal fancy has been his goal-kicking. He had a career high 12 in 2018 but that fell to four and three in the following two seasons. This year there has been a revival. A clever snap in the second term against the Magpies gave him six for the season, ensuring the Demons have options aplenty inside attacking 50.

Alex Neal-Bullen got the Demons off to a fine start with the opening goal of the match, a set shot from 30m, and thought he had his second when his quick kick looked to have cleared the hands of leading teammate Tom McDonald. He dashed from the field as if it had, but the good news didn’t last long – the score view system found the ball had flicked the hands of McDonald, and the soft call was overturned.

Nothing to crow about

Jamie Elliott had a return from injury to remember last week when he booted six goals against the Crows, including four in the first term. But against a Demons defence, which concedes the least number of scores and goals per opposition inside 50, it wasn’t so easy in the first term on this occasion. Elliott’s best chance to have an impact came with a minute remaining but his set shot from the boundary hit the post.