The Newcastle Knigths have landed a huge coup on the eve of the season, appointing club legend Danny Buderus as their head of football.

Buderus, a former captain of the Knights and regarded as one of the club's best ever players, will join new coach Adam O'Brien in heading up the club's football program. 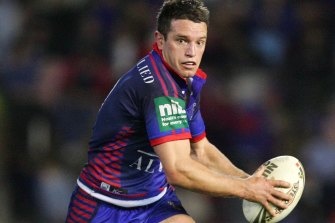 Danny Buderus is considered one of the Knights’ finest-ever players.Credit:Getty

Buderus, who is also on the NSW Blues coaching staff, previously coached the Knights in a care-taker capacity.

However the new role will be encompass many aspects of the business, including football, recruitment and salary cap management.

“The opportunity to be back involved at the club that I love so much was too good to turn down,” the former Dally M medallist said.

“This is a whole new direction for me post football but it’s an exciting one.

“The club has done a lot of work to get it in the position it is in now, and I look forward to continuing the hard work as we all strive to bring success back to the Hunter.”

Buderus, who will officially begin work with the Knights on March 16, will continue his work with the NSW Origin side as Brad Fittler's team chase a third straight series win.

Farrell set to start at No 10 for England in Six Nations finale
Recent Posts
This website uses cookies to improve your user experience and to provide you with advertisements that are relevant to your interests. By continuing to browse the site you are agreeing to our use of cookies.Ok