Dean Pay would have been understandably nervous watching this unfold.

Having already lost Kieran Foran and Chris Smith to long-term injuries wearing other jerseys, he could ill afford another player to go down in another game where competition points weren’t up for grabs. 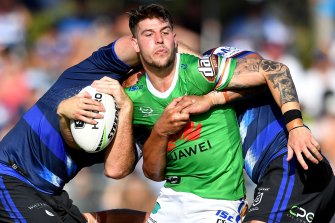 However, the off-season hasn’t been all bad for the Bulldogs. There is now stability off the field after the Canterbury board was re-elected unopposed and there have been some promising signs on the field as well.

Pay’s men followed up their win against Cronulla last week with another gritty performance, falling just short of victory against Canberra. They did it with little possession and without star fullback Dallin Watene-Zelezniak – still suffering the ill effects from the back injury suffered during the All Stars game – against a Raiders side featuring 13 stars from last year’s grand final.

It was, of course, just a trial and often too much is read into such things. But for Canterbury it was an opportunity to regain the momentum they generated towards the end of last season.

The stand-out feature of their performance was again their goal-line defence. Pay’s men made a slew of errors, yet they were able to defend most of them. Despite little quality football, the game finished two tries apiece.

The Green Machine lacked cohesion, the result of a long lay-off and a lack of game time with their gun new recruit, England halfback George Williams. Canterbury quickly went ahead 10-0 after Dylan Napa crashed over from close range. Jack Wighton bridged the gap in the 25th minute. Only one other additional try was scored, by Canberra playmaker Jack Wighton late in proceedings, to decide a scrappy affair.

The venue, Port Macquarie Regional Stadium, wasn’t the first-choice option. Canterbury have made a long-term commitment to the North Coast region and intended to stage the trial in Coffs Harbour. However, Elton John’s concerts in the town put paid to that, resulting in top-flight league action returning to Port Macquarie for the first time since 2012. Hopefully the ticket sales were strong enough for Group 3 officials to make a return on their $70,000 investment.

Curtis Scott ran out in the lime green jersey for the first time. It remains to be seen when he will next get the opportunity to do so. His off-season has been one of lawyers and police charges – seven to date – ever since he was pepper-sprayed, Tasered and handcuffed after a big one at the Ivy Nightclub. NRL CEO Todd Greenberg hasn’t yet viewed all of the footage an incident that will determine how much he will contribute to Canberra’s campaign.

Some of Canberra’s big forwards struggled to get back onside during changes in possession and the backs lacked the fluency that marked their 2019 campaign. The left-side attack has a totally different look about it after the departures of Aidan Sezer, Joey Leilua and Jordan Rapana and their replacements occasionally got caught out in defence. They will be better for the run.

Tags: Bulldogs, Canberra, limi, push, to
You may also like
Latest Posts