Wayne Bennett has always been big on appearance – often refusing to let players take the field with dodgy haircuts – but he had no such issues elevating one of the most heavily-tattooed men in the NRL to captain of South Sydney.

Adam Reynolds was confirmed as the new skipper on Tuesday, getting the nod ahead of representative mates Damien Cook and Cody Walker. 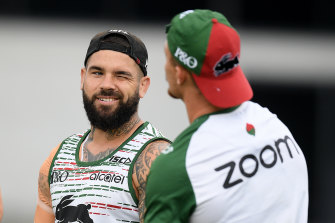 Bennett loved the fact Reynolds had been given the chance to lead his childhood club – but has never appreciated his tattoos.

"He's a sensible bloke, I just can't believe what he has done to his body,'' Bennett said. "It goes to show we're all imperfect.

"He's very talented and has all the skills, he just needs to be that player every week and want to put a game away. He can get a little laid-back too much at times, but he's learning that.

"Adam was born here, he's played here from day one, it was going to mean a lot to everyone, but I thought it would mean a little bit more to him. That's the way you want your club to be, to be a supporter and go on to captain your club – it doesn't get much better than that.'' 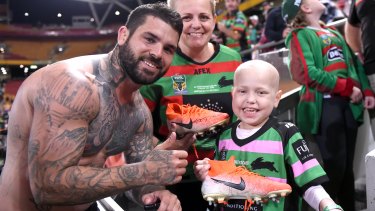 Reynolds has often had tattoos removed so he can replace them with new ones. He quipped to the Herald he had kept some room for a portrait of another Souths skipper, Bob McCarthy. "I just need to find the right image of him,'' Reynolds said.

Now 29, Reynolds is proud to lead his team into action, starting with Saturday's Charity Shield in Mudgee, and hoped to stick around well beyond the end of next year when his contract expires.

The tough No. 7 with the wonderful right boot has had his share of injuries, including a transverse process fracture in his back, which later caused a few spasms towards the end of last season. Apart from a minor groin strain that kept him out of the Nines, Reynolds said he was now feeling the best he had in a few years.

"The body is feeling good and I'd say it's the best shape I've been in for a few years,'' Reynolds said. "I found Bikram yoga last year which really helped with the back, and I've kept that up. It's been fantastic for the body.

"I'd love to get to 300 games, but that's still a fair way off. I'll keep going until the body falls apart or I can't keep up with the younger boys. I've got a lot of life left in me. I'd love to push out another three or four years after 2021.''

When Reynolds replaced Chris Sandow in the No.7 jersey for the start of the 2012 season, he recalled the club having five captains. Bennett only ever believed in one, and maintained it was a job that could not be downplayed.

"I've never devalued it, it's always been a great moment in a player's life, I want them to own it and feel good about it and understand the importance of it,'' Bennett said. "That's why I've never had dual captains or three captains – I want one person to say, 'that's my job, that's what I gave to do'.''

Bennett added it was important he had a skipper who had the courage to pull him up and say ''coach, enough is enough'' when required.

Reynolds said Sam Burgess always delivered the most stirring pre-game speeches, but hoped he could lead more by his actions on the field.

Burgess himself said of Reynolds' appointment: "Adam will continue to be himself, he's a bit of a joker, but his best form of leadership will be playing well for the team and getting around them the park.''

Tags: Bennett, call:, Captain's, ov, Why
You may also like
Latest Posts