All three Carlton directors who faced a challenge for their positions on the club's board have been re-appointed by members, including former captain Chris Judd.

Judd, the club's football director, recruitment executive David Campbell and QC Christopher Townshend were re-elected to the board at the club's annual general meeting on Monday night after a vote was held before the gathering. 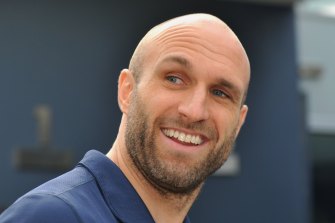 Softball Australia chairman and businessman John Hollingsworth and Blues member Steven Khatib, who works in service management, challenged the three board members who had been up for re-election.

“I thank all the candidates for their interest and involvement in the election process,” Carlton president Mark LoGiudice said on Monday night.

Hollingsworth and Khatib had been critical of how the club handled the exit of Blues legend and former list manager Stephen Silvagni.

He was removed by the club after the draft, with the Blues citing the difficulty of Silvagni being in the role while sons Jack and Ben were on the list.

Hollingsworth said he wanted to bring “transparency and best practice to the club” while Khatib also felt the club was reluctant for members to have their say, among other grievances.

The Blues appointed David Teague as their head coach in 2019 after Brendon Bolton was sacked. Carlton have not played in the finals since 2013.

LoGiudice also said the club was on track to be debt-free for the first time since 1996, having paid off more than $2 million of "historical debt" in recent years, but he did not say when the debt would be gone.

Tags: board, Carlton, challengers, fail
You may also like
Latest Posts