Sam Walsh has wasted no time in committing his long-term future to the Blues, with the 21-year-old signing a four-year contract extension with the club within days of being elevated to the co-vice captaincy alongside star defender Jacob Weitering.

Walsh has committed to the Blues until at least the end of the 2026 season.

“The decision could not have been easier for me – our club has a clear direction, strong leadership, as a playing group we know what we want to achieve and I want to do everything I possibly can to get us there,” Walsh said. 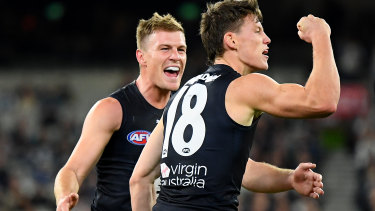 “From the moment I got drafted this football club has been amazing for me and my family, that includes our members and supporters, I am so grateful for how they’ve embraced me from day one.

“I’ve never taken for granted what it means to pull on that navy blue guernsey, it represents so much to so many people.

“We have a real focus to make Carlton people proud, earn respect back for this football club and everyone we represent, and I am very excited to be part of that, not only this season but for years to come.”

Meanwhile, Collingwood have also signed one of their most talented young players, with 22-year-old running defender Isaac Quaynor agreeing to a three-year contract extension.

Quaynor, who was out of contact this year, signed on until the end of the 2025 campaign.

The Magpies are steadily working through re-contracting key players, with star defender Brayden Maynard already having signed on, while the club has started talks with Darcy Moore’s management. 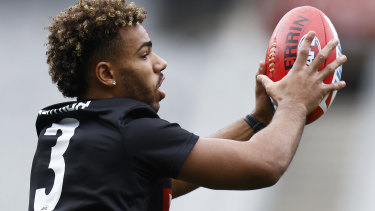 Moore and Jordan De Goey are restricted free agents this year, as was Maynard until he signed.

“We see Isaac as an integral part of our future. He has already developed into a very good medium-sized defender and, in our view, there is so much growth ahead,” said Collingwood’s GM of football, Graham Wright.

“He has talent and strength, is a model professional and is an excellent team-mate. Isaac can be a cornerstone of our team for a very long time.”

Quaynor was a first round selection by the Magpies in the 2018 national draft. He made his debut late in the 2019 season, and played 20 of 22 matches in 2021. He has played 35 matches in black and white so far.

“It’s pleasing to know I have Collingwood’s long term faith and, equally, I was keen to make a commitment,” Quaynor said.

“I feel that I can be my best at Collingwood. It’s the right place for me and I was keen to acknowledge that. The fans and the crowds, the general environment, are superb and I’m bullish about what is to come on the field.