Sergio Silvagni, a Carlton great and family patriarch, has died.

Silvagni, who turned 83 in June, passed away on Thursday morning. He had been dealing with multiple health issues. He is survived by his wife Rita, three daughters Lisa, Danielle and Michelle, as well as son Stephen. The Blues were set to issue a statement. 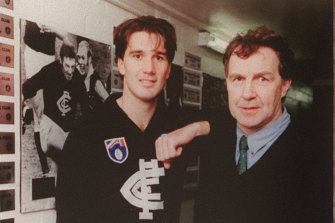 Stephen Silvagni with his father at Carlton.Credit:The Age

Silvagni had served Carlton in a variety of roles, including as a long-time assistant coach. He filled in as senior coach when Ian Stewart suddenly quit in 1978, before another favourite son Alex Jesaulenko took over.

He was a Carlton captain, twice a best and fairest winner and won premierships in 1968 and 1970. In all, he played 239 games and kicked 136 goals for the Blues. 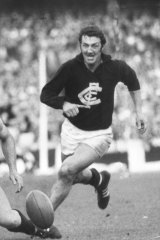 Sergio Silvagni in action in the 1970 grand final.Credit:The Age

Silvagni was the first of three generations of his family to play for Carlton.

The senior Silvagni’s stature at Carlton was underscored by the fact that Stephen has always been known by the acronym “SOS” – son of Serge.

His grandson Jack made his debut in 2016 and is still with the team. All three generations have worn the No.1 on their jumpers. Jack’s brother Ben was also on the Carlton list for two seasons.

Silvagni was inducted into the Carlton hall of fame in 1989 and elevated to Legend status in 2016. Both he and Stephen were named in Carlton’s team of the 20th century.