Carlton kept a surging Essendon at bay on Sunday at North Port Oval, claiming a one-point win against their arch rivals in the first AFLW meeting between the two teams.

The game had some theatre about it even before the first ball-up, with star former Blues Maddy Prespakis and Georgia Gee playing against their old side for the first time since switching jumpers in the off-season. 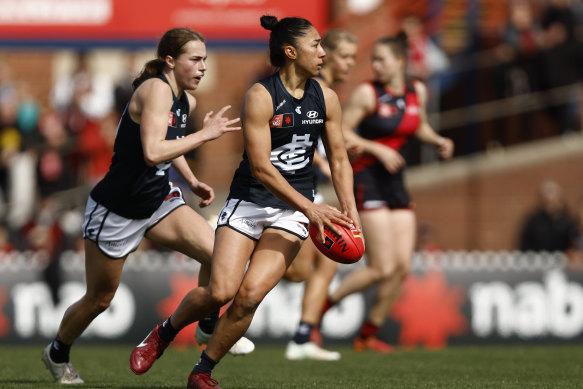 Carlton entered the fourth quarter with a healthy 21-point lead but Essendon booted two goals in quick succession, from Daria Bannister and Steph Cain, to get within two goals.

Prespakis then kicked a goal and fuelled Essendon’s surging momentum, cutting the margin to three points and setting the stage for a tight finish. The Dons continued to push for the lead but missed twice before Bonnie Toogood almost took a pack mark in the dying seconds in front of goal, with her side just a point down, but the ball escaped the co-captain’s hands.

It would have been a miraculous win from the Bombers, who were kept from getting near goal for the first three quarters and looked the less experienced and composed team on the day.

Throughout the game, Carlton had the upper hand at the coalface, beating the Bombers at the contest and in clearances, much to the credit of ruck Breann Moody, who had 30 hitouts and nine clearances.

Mimi Hill (21 disposals) was also instrumental in winning the ball, along with Abbie McKay (11 disposals).

Until the fourth quarter, Carlton were better at moving the ball and keeping control of it, whereas Essendon struggled to exit their defensive 50.

The most intriguing of a number of interesting match-ups on the day was Carlton skipper Kerryn Peterson’s duel with Prespakis in the battle for the midfield in the first quarter. Prespakis had a day out against her former side, leading the disposal count for her team on 21, followed by co-captain Steph Cain on 16.

Essendon debutante Alex Morcom had a hard job starting on two-time leading goalkicker Darcy Vescio, the Blue slotting two through in the opening term and another in the third. Two of those majors were from free kicks against the 26-year-old Bomber, who was recently promoted from the VFLW side.

Sophie Van De Heuvel was also moved on Vescio throughout the game, but the Blue continued to find space and gain ascendancy.

Both sides had youngsters having an impact, including Carlton’s Keeley Skepper, who booted a goal in her AFLW debut. Blues second-gamer Mia Austin also had a great game, keeping Essendon from easily running to goal with strong tackling pressure and booting a goal in the second quarter.

Paige Scott was productive for all four quarters, making it hard to believe the 18-year-old has only played two games at AFLW level, as she looked like one of the most experienced out there. The powerful forward and last week’s joint rising star nominee finished the day with 10 disposals but more importantly applied constant pressure throughout.