The Cats have opted to play the Bulldogs behind closed doors in Geelong and the AFL has moved two round 14 games from Melbourne to Tasmania as Victoria’s COVID-19 restrictions continue to wreak havoc on the fixture.

Two games from next weekend’s fixture will be moved south, with North Melbourne’s clash with Brisbane on Saturday relocated from Marvel Stadium to Blundstone Arena in Hobart, while Hawthorn will now play Essendon in Launceston on Sunday instead of at the MCG. 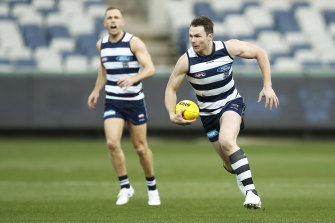 Patrick Dangerfield and the Cats will host the Dogs behind closed doors at GMHBA Stadium.Credit:Getty Images

Friday night’s blockbuster between Geelong and the Western Bulldogs will go ahead at GMHBA Stadium, but fans will be unable to attend.

A source at the AFL told The Age that Geelong were given the option to move the game to another state where they could host a crowd, but opted to keep their home-ground advantage.

Saturday’s games between Gold Coast and Port Adelaide and GWS and Carlton will go ahead at Metricon Stadium and Giants Stadium respectively.

Hawthorn president Jeff Kennett had said on Sunday the club would prefer the match against the Bombers be played in Melbourne, as long as a crowd of at least 25,000 was allowed at the MCG.

On Monday, Hawthorn CEO Justin Reeves said the decision to relocate the game was disappointing but “the best result we could have hoped for given the current COVID-19 restrictions in Victoria.

“By taking the match to Tasmania we are able to bring an exciting match to our Tasmanian members and fans and play in front of a crowd,” he said.

“We have been working closely with the Victorian government and the AFL to achieve the most ideal outcome based on current restrictions. Furthermore, the club would like to extend its thanks to the Tasmanian Government and Premier Peter Gutwein for the support and assistance provided in rescheduling this match to Launceston.”

“While it is disappointing we are unable to host games in front of crowds in Victoria during round 14, we hope the situation continues to trend favourably so we can welcome back members and supporters as soon as possible,” Auld said. 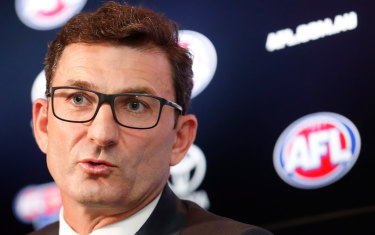 “The decision to relocate two games to Hobart and Launceston was made in close consultation with each respective home team and the Tasmanian government having regard to the broader connection each home club has in Tasmania and to allow for members and supporters in Tasmania to attend the games.

“The Geelong Cats v Western Bulldogs match will continue to be played at GMHBA Stadium with no crowds as per current Victorian government advice – the decision to continue to play this match at GMHBA Stadium was made in consultation with the home team and was in line with their preference not to move the game.

“We will continue to closely monitor the situation in Victoria and work with the Victorian government and other state and territory governments, with the fixture remaining a week-to-week proposition for now.”

Tags: and, behind, c, Cats, Dogs, play, to
You may also like
Latest Posts

Art Rooney II on Steelers QB Ben Roethlisberger: 'It’s not written in stone that this is his last year'