It's the preliminary final new boys against the side that's been there more than most since 2007. And while that lack of experience for the Lions might seem ominous, the circumstances of this match renders that factor a moot point.

Brisbane vanquished any questions about their finals immaturity when they beat Richmond in the qualifying final. On top of that, the Lions have had the advantage of spending an unprecedented amount of time with the comforts of home this season, as opposed to the nomadic Victorian Cats side.

There really couldn't be a greater opportunity for Brisbane to win their first flag since 2003 given the grand final is on their home deck too, but in their way stands a determined Cats side.

The round six match, all the way back in June, was one of the Cats' best for the season.

Trailing by 22-points some 12 minutes into the second term, the Cats kicked nine goals in a row to blow Brisbane out of the water at the SCG. 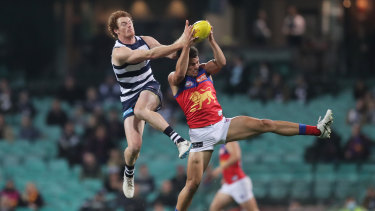 Brandon Starcevich and Gary Rohan fly for a mark in round six. Credit:Matt King/AFL Photos

Geelong also did this with only two fit men on the bench – Quinten Narkle and Mitch Duncan were injured in the first quarter.

Chris Scott said in the lead-up to both the Collingwood and Port Adelaide finals that it was hard to take much from prior contests this season due to its unprecedented nature.

Ablett was uncharacteristically wayward at times on that night, but he still kicked two long-range goals. It was the last time he kicked multiple goalsin a match.

Patrick Dangerfield. For someone who has played in so many preliminary finals, and won almost everything there is to win in the AFL, it is absurd he has never played in a grand final.

Yes, Collingwood were listless, but the intensity with which he played in the semi-final was Dangerfield at his very best. From the outside looking in, that signalled that his desire to win a flag had never been higher.

Sure, Ablett may be playing his last game and his deft kicking and class can hurt teams, but the sheer momentum Dangerfield seems to hold at this point in the season is pure X-factor. 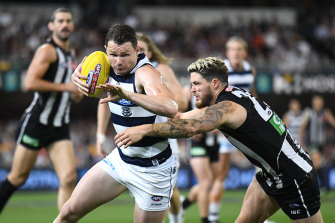 X-factor: Patrick Dangerfield in action against the Pies.Credit:Getty Images

Charlie Cameron is undoubtedly Brisbane's X-factor, and his three goals, five score involvements and four tackles against the Tigers was a reminder of that.

Geelong will remember all too painfully the 2017 preliminary final where Cameron, then playing for Adelaide, booted five goals in one of his career-best performances.

Collingwood learnt the hard way that if you let Geelong have the time to set up the field in the structured way they like, it is nearly impossible to move the ball with any fluency.

Brisbane, across the home-and-away season, were more likely to score from turnovers, while Geelong were the most likely of any team to score from stoppages.

The likes of Lachie Neale and Mitch Robinson will be crucial to stopping the Cats in this respect.

Harris Andrews, along with his fellow defenders, will clearly be important for the Lions' intercept marking and turnover-creating capabilities. Hawkins was one of few forwards to get a hold of Andrews this season.

The biggest difference between the sides is their disposal efficiency differential ranks in the home and away. The Cats were ranked first and the Lions 12th.

This speaks to the Cats' desire to control the ball more and play with less speed. They prefer to pick off their targets forward of centre, while there is a little more chaos in Brisbane's method.

For a side that relies on turnovers for their game plan, the Lions will have to really knock the Cats from their usually composed method to get a foothold in the game.

With Andrews, his fellow defenders and the pressure of Brisbane's smalls and midfielders this is possible.

Jarrod Berry was important against the Tigers in the qualifying final.

He has a knack for getting to good positions just outside of stoppages, to be an option for his teammates to clear immediately contested situations. From there, his ability to pick the right kick that either clears the area or finds a teammate is good too.

This is an incredibly tough call. Another preliminary final loss for Geelong, and Dangerfield, would be tough to take, though getting there in a season such as this one is a huge achievement. Even still, it'll be a Brisbane win, on their home deck and with a home crowd behind them. Don't expect the Cats to wilt, but also hard to see the Lions passing up this Gabba grand final opportunity.

Tags: and, Cats, feline, for, Lions, set
You may also like
Latest Posts