Geelong had played poorly and won twice already this season, but they had not played as poorly as they did early in their 30-point victory over North Melbourne on Sunday, 10.17 (77) to 7.5 (47).

North came with a plan to stifle the Cats but for a team who only had a percentage of 43 coming into the match, they should not have troubled last year’s grand finalists as they did at GMHBA Stadium, in conditions perfect for football. 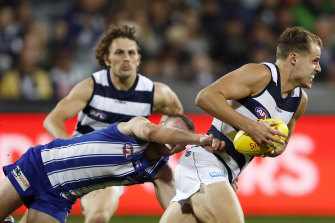 Jake Kolodjashnij of the Cats is tackled by North Melbourne’s Jack Mahony during their clash at GMHBA Stadium. Credit:Getty Images

With those other wins coming against better opposition than the Kangaroos, the Cats faithful might have taken solace in the fact that a win was a win.

But it will be hard for those same supporters and other footy watchers to take solace or be impressed by this win, as the Cats went 3-2 but have to play the ominous West Coast next round.

Cats fans will also be concerned by what looked to be an ankle injury to Patrick Dangerfield. He went down to the rooms early in the fourth term and did not return. 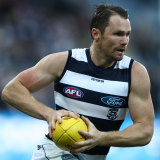 Patrick Dangerfield the game during the fourth quarter and headed straight down to the rooms.Credit:Getty Images

Though after the game he seemed to offer some reassurance, telling Fox Footy: “It’s just a bit of a light tweak – I’ll recover it during the week and be ready to go (against the Eagles)“.

In more good injury news at the Cattery, superstar forward Jeremy Cameron is finally set to make his debut for the club next week.

David Noble’s men led by 10 points at quarter-time, before the Cats clawed their way back in the second term and never looked at risk of losing after Jed Bews secured them the lead.

Scrapping their way to a win against West Coast might be acceptable next week, but beating North with little flow and plenty of missed opportunities this week – especially given North were without Luke Davies-Uniacke, Luke McDonald and Cam Zurhaar from last round- was not expected.

Tom Stewart was a shining light in defence and played with a single-minded attack and poise his teammates sorely missed.

Sam De Koning, in his first game, couldn’t kick a goal but he showed plenty of promise in the air, and with some smart ground level touch work. 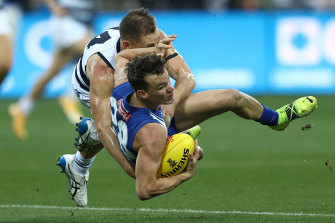 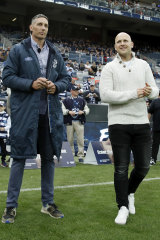 North’s early lead was broadly built on blocking the Cats up in their defensive half, and then spring-boarding into attack. They also threw plenty of numbers around the stoppages.

The AFL and its footy boss Steve Hocking might not have liked this return to 2020 and the decade before, with a healthy number of players folding back to flood the 50, but it was effective for the Kangaroos.

The Cats were very rarely clean with the footy, too. Hawkins missed an early set shot he normally would take, Patrick Dangerfield was kicking clanger after clanger, Tom Stewart bombed a ball across goal out on the full, and Cam Guthrie dropped an easy handball receive.

It all amounted to a frustrated atmosphere at Kardinia Park.

Ben Cunnington was also playing like a man possessed. He had 20 touches in the first half, which included six clearances and even one fend-off on his own teammate. Cunnington, who successfully challenged a suspension to play this week, ended up with 29 touches.

He might not be the most fashionable player but there are few, if any, who can cannon into a stoppage like he can, put out the heat he invited, and then get the ball to a teammate. A highlight in a sometimes dour game.

Farewell, from Gazza and Hazza

There were special scenes pre-game, with two of the Geelong Football Club’s greatest ever players Gary Ablett jnr and Harry Taylor bidding an official goodbye to supporters.

The pair, who retired last season, took part in a motorcade around the ground with their children beside them.

One of the great shames of the COVID-impacted 2020 was that Ablett and Tatylor’s final season could not happen in front of fans in Geelong, but Sunday’s farewell was at least a wonderful acknowledgement.

And no, Ablett cannot return in the mid-season draft despite reports to the contrary. There are rules prohibiting players who retire getting picked in the next mid-season draft, plus Geelong don’t have space on their list.

Tags: are, Cats, Geelo, hardly, purring:
You may also like
Latest Posts